A couple of weeks ago, my sister asked me if I would knit something for a new baby - a friend's grandchild, who was then expected imminently. Margaret would have made something herself (she knitted something for the baby's older brother when he was born), but she's finding knitting too painful for her hands. So we got together in the knitting wool department of John Lewis, and chose a pattern and the wool, and I set to work on a baby jacket. And here it is: 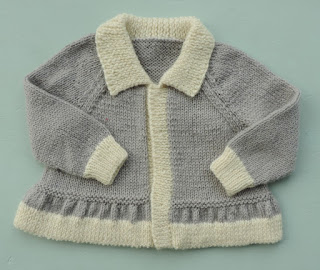 The pattern we chose has two versions of a jacket - one is supposedly for a baby girl (peplum, hood) and the other for a baby boy (no peplum, collar).  Margaret decided she would like a combination (peplum + collar), and  picked neutral colours (soft grey and ecru).  The yarn is Erika Knight for John Lewis Baby DK, machine washable wool.  (The baby's mother wanted natural fibres.)  Very soft, good to knit with.

I really dislike sewing up, so I knitted the body in the round up to the armholes, and knitted the sleeves in the round too.  I find it difficult to get seams in cuffs and welts to look neat, so they are best avoided.  I posted the jacket to Margaret earlier this week.  It had buttonholes but no buttons, as in the photo  - adding the buttons is her job.  And while I was knitting it, the baby arrived - it's a boy.

It's very satisfying to be able to knit an entire garment so quickly, and I think it's turned out rather well.  Eli will look very smart.

And the pattern leaflet is now in the Guild collection.  We need to keep up-to-date when we can.

PS June 2017.  I've just been sent a photo of Eli wearing his jacket - and it still fits him, though he started out big and has grown a lot.  So nice to see it being worn. 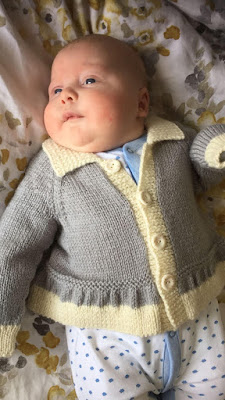