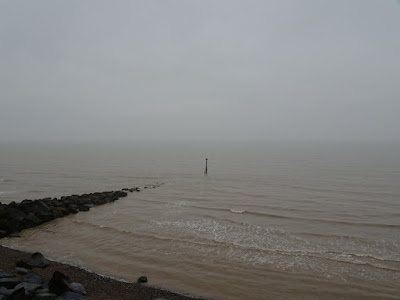 Last weekend I went to Sheringham youth hostel for a knitting weekend.  As last year, it was organised by the Leighton Buzzard branch of the Knitting & Crochet Guild.  The weather this year was different, though - damp, misty, quite mild, no wind.  Sea and sky were almost indistinguishable.  But a knitting weekend doesn't need sunshine and we had a very good time.

On the Friday and Saturday evenings, we sat in the lounge and knitted, had excellent dinners provided by the Youth Hostel staff, and did more knitting.  And lots of chatting.

On Saturday morning we went to The Mo, the Sheringham museum, on the sea front. 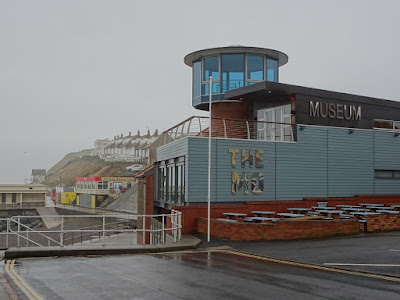 It is not open to the public in the winter, but we had a special tour behind the scenes.  The museum has recently been extended, thanks to a lottery grant, and we were shown how the new storage areas are being used.  We saw some wonderful ganseys, too - some modern ones that we could handle, and others from the museum's collection.  One particularly fine gansey dates from the 1950s - the knitting is meticulously neat, with 14 stitches to the inch, I was told.  (Didn't manage to get a decent photo, I'm afraid.)

In the afternoon, we had workshops back at the Youth Hostel.  I repeated the twined knitting workshop that I did for the Huddersfield branch of the Guild in December.  (And never got around to writing about - Christmas got in the way.)   I had designed a wristlet to knit in two colours of DK.  (There was also a flat piece, that you could think of as a coaster, for those people who couldn't manage knitting in the round.) 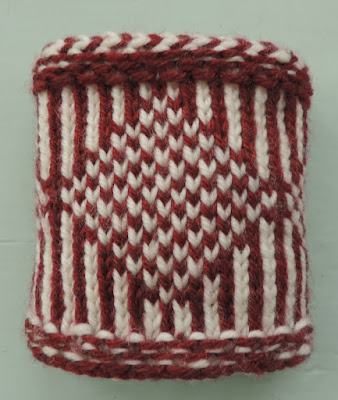 I didn't know anything at all about twined knitting before I found that I had somehow volunteered to lead a workshop for the Huddersfield branch.  It was originally scheduled for April 2016, but postponed due to my argument with a ladder.  So I've been practising twined knitting for quite a while.  Looking back, I see that when I knitted a cuff or wristlet in twined knitting in March last year,  I said here that I didn't want to knit a second one.  But since then, I've got more enthusiastic, and I decided that over the weekend I would knit something a bit bigger, just for me.  Over the weekend (including the long train journeys there and back)  I worked on a pair of fingerless mitts.  Not in two colours this time, but using the two ends of one ball of yarn.  I love the effect of two-end knitting and the surface patterns you can make.  The mitts are going to be very warm and cosy.  More when I have finished them. 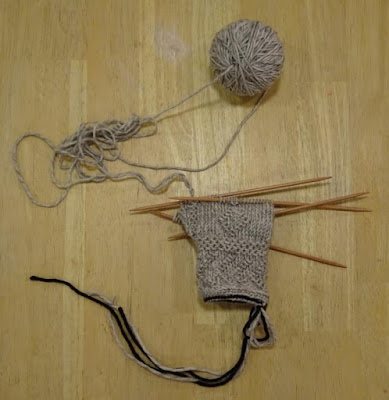 Thank you very much, Brigitte, for organising another really enjoyable weekend.