75 years ago, Britain had been at war for more than two years, and on the home front, life was difficult.  Food and clothes were rationed, so Christmas could have been cheerless and miserable. But magazines like Stitchcraft tried to show readers how to make the best of things. The December 1941 Stitchcraft  had a bright and stylish jumper on the cover - it took just 12 oz. (340g.) of 4-ply (fingering) wool, and 1 oz. of contrast.  The magazine also offered a pattern for a sleeveless V-neck pullover for "one of your friends in the Forces", as well as two more knitting patterns for women -- another jumper and a cardigan.

An ad in the magazine illustrates the advantage of knitting your own clothes.  Greenwoods of Huddersfield would supply the wool to knit any of the patterns in the magazine, or would knit them for you.  The wool to knit the cover jumper cost 9/5½ (9 shillings and five pence ha'penny - about 47½p, directly translated into decimal coinage).  But as well as the money, you had to send in 6 of your clothing coupons.  Alternatively, they would supply it "completely hand-knit and ready to wear" for 25 shillings (£1.25) and 8 coupons.  So if you knitted the jumper yourself, you saved a lot of money, and 2 clothing coupons. As the war went on (and after the war too), clothes rationing became more severe, with fewer coupons issued to each person.  Knitting for yourself and your family was essential, to eke out the precious clothing coupons.

Stitchcraft at that time had a cookery article in each issue, and in December 1941 it was of course about Christmas cookery - or how to cope with limited supplies of everything you might have thought essential.  There's a recipe for an Excellent Wartime Cake, with no eggs, and a Holiday Pudding, described as "a war-time substitute for our usual Christmas pudding - not the rich, fruit-laden affair of former days, but quite a good one, and far more digestible!"   Both the cake and the pudding contain raisins - it seems surprising that they were still available at all, as they were imported, but clearly supplies were much more limited than before the war. 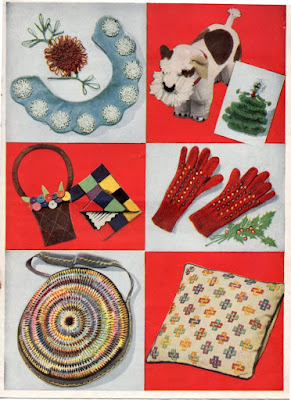 Christmas present giving was not forgotten either - several pages of the magazine are devoted to ideas for gifts, largely made from oddments of wool and scraps of fabric.  There are needle cases, pin-cushions like cacti in pots, a soft toy fox terrier, and an egg cosy "for the monthly egg".   To be honest, these knick-knacks mostly do look like something made out of oddments, though the gloves and scarves would be very acceptable.  And the jumper, cardigan and pullover patterns are appealing, even today.  Overall, the magazine did a very good job of encouraging Christmas cheer.

A merry Christmas to us all.
Posted by Barbara at 23:24