Yesterday afternoon I was at the Knitting & Stitching Show in Harrogate.  I wasn't there as as a visitor, but as part of  'Crafters in Action' - several guilds that had stands at the show (the Quilters' Guild, the Lace Guild., the Batik Guild, ....), had been asked to provide people to demonstrate their craft.  So I was there to knit on behalf of the Knitting & Crochet Guild. 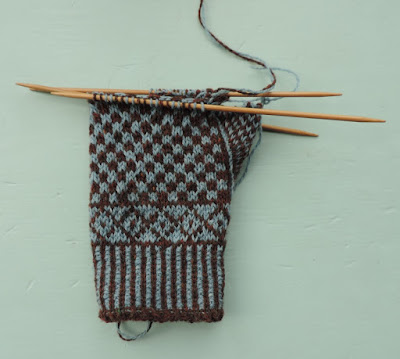 I was knitting a fingerless mitt.  (They will be a pair eventually, of course.)  The design is called Bonham and it's by Angharad Thomas - she decided that she had knitted far too many glove fingers in the last few months (as you can see here), and needed a break.  I thought the Bonham mitts were an appropriate choice to knit yesterday, because proceeds from the sale of the pattern (via Ravelry) go to the Guild.

I did have some time to look around the rest of the Show too.   I met Louisa Harding at her stall, where she was selling her lovely Yarntelier cashmere.   (By chance, I was wearing my Petal Cowl in her Amitola yarn, as I pointed out to her.)   And I was also seriously tempted by the beautiful colours on the Knitting Goddess's stall, especially the bundles of 10gm. skeins in related colours.  But I keep telling myself that I don't need more yarn (and I really shouldn't buy yarn when I don't even have a project in mind).

Just by the Crafters in Action area, there was a Vintage Tea Party going on,   The idea (I think) was to sew an outfit using a dress pattern from a special vintage range, and then wear it at the tea party.   You could choose any decade from the 1930s to the 1960s, but the 1950s seemed to be particularly popular.  Here are two wonderfully elegant ladies taking a break from the tea party. 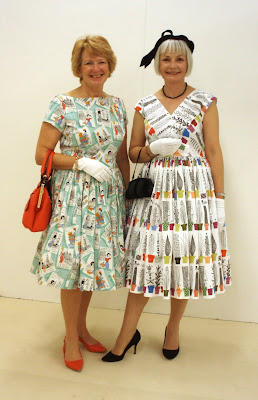 Elizabeth's dress (on the right) is made from an Almedahls fabric, printed with a design of plants in pots.  We thought it would be suitable to wear for a little gentle gardening in the summer - dead-heading roses, perhaps.