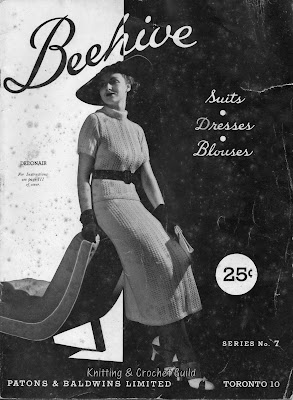 Almost all the publications in the Knitting & Crochet Guild collection were either published in the U.K. or were readily available in this country, but we do have some waifs and strays in the collection.  One is this 1930s Patons & Baldwins pattern booklet, published in Toronto.  (Although the parent company was British, there were overseas branches. Beehive was a brand name used throughout the company - and a beehive is still the trademark of Patons.)

The booklet has about two dozen patterns for suits, dresses and blouses.  And, if you like 1930s style, they are very attractive,  I think that there must have been an independent design team in Toronto, but a few of the designs are very similar to designs in P&B's pattern leaflets published in the U.K.  Here's a blouse and skirt set called 'Daytime'.from the Canadian booklet, for instance:


The blouse looks identical to a Lady's Jumper pattern published in the U.K., except that it has long sleeves.    The lace pattern is the same, and the yoke and tie-neck are constructed in the same way.  There are some differences., though, to allow for differences in yarn thickness.


The 'Helps to Knitters' leaflet was advertised in 1934, which I guess is the approximate date of the Canadian booklet too.  The long-sleeved version is very pretty - I can't think that the skirt would look good for long though.  Surely it would very quickly stretch and go baggy, when it's supposed to be slim and elegant?

Some of the other tops are lovely too.  Most, like 'Sentiment', seem to be intended for summer wear.  A top knitted in wool, even if fine and lacy, seems all wrong for hot weather, to me.  Pretty, perhaps, but so much less practical than cotton.  I must confess I'd rather wear a t-shirt.

As well as the fine lacy knits in the booklet which would be time-consuming to knit, there is a section on 'Quick Knitteds' - a 12-hour pullover, a one-day cardigan and a three-day suit.  They are all knitted in P&B's Totem wool, which seems to have been Aran weight, or thereabouts.


The 12-hour pullover also appeared in a pattern leaflet published in Britain.  It was advertised as a '12-hour pullover'  in Stitchcraft magazine in the summer of 1935. 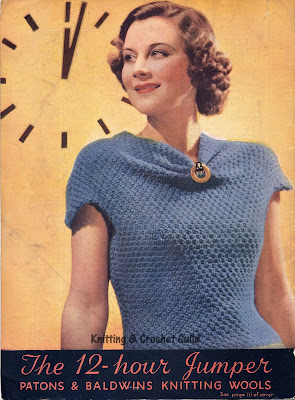 The ad said "You can knit it in 12 hours!  That's a liberal estimate, because one of our own workers knitted a copy in seven hours!  The stitch is simple, interesting to knit, and most fascinating to look at.  Cape sleeves and draped neckline are fashionable touches."    Apart from speed, I don't think it's a successful design - the fabric is too thick to drape well.  It would look much better knitted in a finer wool.  But then it wouldn't be a 12-hour knit....


The suit is quite plain, but the cardigan has what looks like an all-over cable pattern,  In fact, it's more like a twisted double rib, and doesn't need a cable needle, so could be  faster to knit than it looks.  To call it a one-day cardigan seems very misleading, though.  It suggests that if you cast on when you get up in the morning, you could finish it on the same day.  But it must surely take a lot longer to knit than the '12-hour jumper' - they are in the same yarn.  So does 'one day cardigan' mean that you could knit it in less than 24 hours?   That sounds more like half a week's work.

One interesting feature of the patterns in this booklet is that the instructions are often given for three sizes.  The sizes are usually all quite small (up to 36 in. bust), but sometimes going up to a 40in. bust.  In Britain at that time, most knitting patterns, including Patons & Baldwins', were written for only one size, typically a 34in. bust.  So these Canadian patterns might be easier to update for modern figures than British ones.

Members of the Knitting & Crochet Guild can download a copy of the booklet from the Membership area of the website - look under Pattern Downloads.
Posted by Barbara at 10:28