A couple of months ago, I was recording the Argyll leaflets in the Knitting & Crochet Guild collection, and noticed a small batch of very appealing leaflets.  In this context, Argyll has nothing to do with Argyle-pattern socks: it was a brand of knitting wool, made by a Bradford spinner, Arthur Mortimer & Co. We have several hundred Argyll pattern leaflets in the collection, ranging in date from the 1950s to the 1980s.

The 1950s Argyll leaflets are mostly in black-and-white, and small (about A5 size).  But the three earliest leaflets that we have are larger, and in colour.  They were issued in about 1950, as near as I can tell.


Leaflet 103 is a twin-set in stranded knitting - the design on the cardigan is almost an Argyle pattern.  I wonder if that was deliberate?

Leaflet 104 is a girl's twin set, with rather odd-looking squirrels holding green acorns.  I think it would be easier to knit the design using intarsia rather than stranded knitting, but the leaflet doesn't give any guidance about how to do the colour-work  It just gives row-by-row details of what colour to use for each stitch, as in "14th row. -- 38R., 8 B., 1 R., 9 B., 2 R., 2 G., 40R."   Why didn't they give a chart?  So much easier to follow.

Finally, leaflet 108 is in some ways the most interesting.


It is a cardigan knitted in plain yellow wool and Argyll Multi-tone - evidently a random-dyed yarn.  I found an ad in a 1951 newspaper for a yarn shop selling Multi-tone. The shop sold three colourways:  natural/rust/green (illustrated in leaflet 108), blue/white/pink and blue/yellow white - price 1s. 6d. an ounce (7½p).

The front of the cardigan has what the leaflet calls 'bobbles' of the multi-tone wool.  It is basically stripes of two rows of yellow and 6 rows of multi-tone, but the instructions for the first row of the 2nd yellow stripe read: "Knit 1, * drop the next stitch down 6 rows to the yellow stitch and knit through the yellow stitch and the loops of multi-tone wool, knit 5, * repeat from * to * to the last 2 stitches, drop 1, knit 1".   (The last 'drop 1' must mean to drop it down 6 rows, as just described, rather than just dropping it altogether.)  So the yellow stitch that you pick up from 6 rows below is stretched over those 6 rows, while the multi-tone stitches form the bobble in between, in a kind of seersucker effect.

You do the same thing on the 4th, 6th, 8th, ... yellow stripe.  Then on the 3rd, 5th, 7th, ...  yellow stripe, the instructions are the same, except that you start the row by knitting 4 stitches instead of 1, so that the dropped stitches are 3 stitches further on than they were before.

This is what it looks like, from the leaflet. 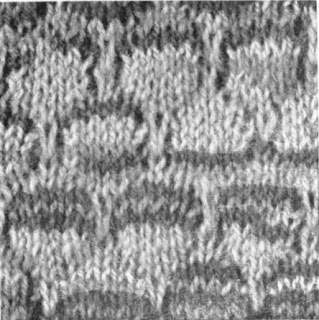 I had not met a stitch pattern like this until I saw this leaflet, but then PixieMum commented on my post last month on knitting sampler squares, "Any idea what Gladys meant by "B1 Thus = . wool back  drop next st. 4 rows down, then knit Dropped st. and 4 horizontal loops above tog. as one stitch. Have you come across this before?"   And so I was able to say that yes I had, and that presumably the intention was to create a bobbly effect.

I think that Argyll did not produce many of these colour leaflets  - I suspect that the first pattern leaflet they produced was number 100 (several spinners started counting at 100).  The next leaflet number in the collection is 138, which is smaller and black-and-white, so I think there were at most 37 of them and probably far fewer.  But the three we have are so attractive that it would be nice to have some of the missing ones.

In the 1980s and 1990s, when many British manufacturers of hand-knitting yarns were in difficulties, the Argyll brand was struggling, and the business was acquired by Thomas B Ramsden & Co.  (See here.)   We have permission from Thomas B Ramsden to copy their vintage patterns for the personal use of Guild members, so if any member would like to knit one of these (in 2-ply!) please ask, via collections@kcguild.org.uk.
Posted by Barbara at 16:49