I just discovered mistake rib!  It's obviously not new, as it already has a name, but it's new to me.

The discovery came about because I've ordered a copy of Sequence Knitting by Cecelia Campochiaro.  I've been hearing about the book since it was published, e.g. in Tom of Holland's blog, here.  It's not easy to buy it in the U.K., so I have finally ordered a copy from the U.S., and it is now making its way slowly over the Atlantic (I hope).   After I ordered it, I started thinking about the kind of sequences that I think she's talking about.  One idea is to choose a sequence of knit and purl stitches and repeat them over and over on every row, so every row starts at the beginning of the sequence.  You get different stitch patterns depending on the number of stitches you have.  So for instance, the simplest sequence would be K1, P1.  If you have an even number of stitches, you get single rib, and an odd number of stitches gives moss stitch.  It's fascinating that two stitch patterns which look and behave so differently should be so closely related. 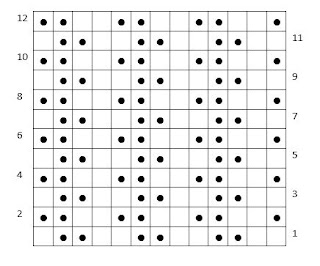 The resulting fabric is deeply corrugated and quite stretchy, but doesn't pull in like double rib.

I thought that such a simple but good-looking stitch pattern must be already known, and not a new invention.  And a few days later, in the way that coincidences happen, I found a knitting pattern that uses it.

It's a smart jacket, from about 1940, and would be very warm, I think.  The leaflet doesn't give a name to the stitch pattern, but it prompted me to look in Barbara Walker's Treasury of Knitting Patterns.  And there I found it, called Mistake Stitch Ribbing.  She says 'This handsome ribbing may very well have been discovered by an accident. The "mistake" consists of working Knit-Two Purl-Two ribbing on one less stitch than required.'   It doesn't seem very plausible to me that it should have been the result of a mistake - as she also says, it would have been obvious very quickly that it wasn't double rib.  I think any knitter intending to knit double rib would have corrected the mistake before realising that it is a worthwhile stitch pattern in its own right.   But the rather unfortunate name seems to be firmly attached.

It would be nice to knit something more than a swatch in mistake rib.  It would make a nice scarf, and there are lots of examples in Ravelry.  (It is reversible of course - every row is the same.)   But I have plenty of scarves - something different would be good.
Posted by Barbara at 10:22