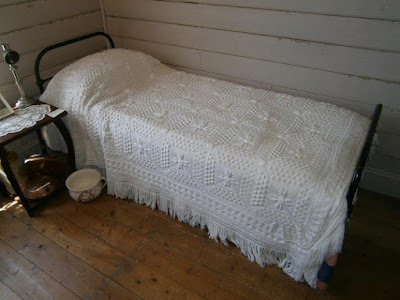 A few months ago, an email came to the Knitting & Crochet Guild collections team, with an enquiry about a 19th century knitted bedspread.   The email was from a member of the Blue Mountains Historical Society (BHMS), based near Sydney, Australia, and there was a photo of the bedspread attached. The bedspread is on show in the Society's museum, a 100-year-old cottage called Tarella.  The bedspread was given to the museum more than 10 years ago, and the only information about it from the donor was that it had been knitted by a Susan Beaumont, who had lived in Blaxland (near Sydney).

Lois, who sent the email, said "The bedspread was in desperate condition, and repairs over the years, prior to accession, had been cobbled together by using whatever thread of whatever colour was available at the time." She had lovingly conserved it, and attached it to a cotton backing sheet to stabilise it and prevent further damage. She had been asked to give a talk about the bedspread, and the work she had done on it, and was hoping that she could find out more about it.

The BHMS had by this time found out something about Susan Beaumont: she was born in about 1840, and came from Huddersfield.  She emigrated with her husband and four children, arriving in Australia in 1883, and died at Blaxland in 1911.  Lois was hoping that if she could find a date for the bedspread pattern, that might indicate whether Susan Beaumont could have made the bedspread before she left Huddersfield, or whether it had been made in Australia.

The bedspread is in a style that was common in Victorian times - knitted in white cotton, with the main part in squares, and an edging in a different pattern.  We have examples in the Guild collection, including one that is very similar, but not identical, to Susan Beaumont's.  (The card with '47' records which box it's kept in.) 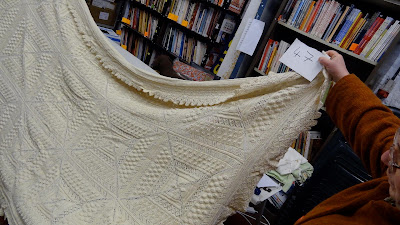 I quickly realised that Susan Beaumont probably didn't use a single pattern for her bedspread, but one pattern for the central squares and another for the edging (which is a leaf pattern of a familiar kind).  For instance, A Knitting Book of Counterpanes, published by Mrs George Cupples in 1871, gives patterns for squares, strips and edgings - the knitter can choose a pattern for a square or a strip, and combine that with any of the edgings to make a bedspread. 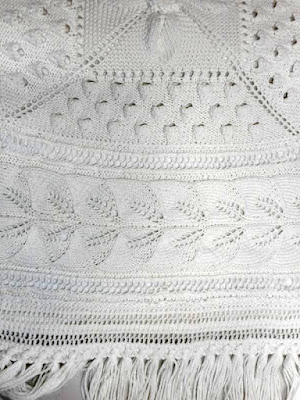 I was very doubtful that I would be able to find an exact match to the bedspread.  We have quite a few 19th century books of knitting patterns in the collection, and many more are available online - we have some magazines from the late 1800s, too, such as Weldon's Practical Needlecraft.  But the individual patterns are not catalogued, so to find a match to the bedspread we would have to look through all the possible publications  - and to make things worse, some of the knitting books are not illustrated.  Without much hope of finding anything, I looked in Ravelry at illustrations of bedspreads.  (Using Ravelry's pattern browser, it's easy to search for, say, knitted bedspreads with a photo - there are 294.)  Of course, most of the designs are modern, but there are a few of the kind I was looking for - and eventually I found a match!  (Much to my surprise, I should say.) Someone has helpfully uploaded an illustration of an identical square, with a link to the pattern, which was published in 1886 - in an Australian newspaper. 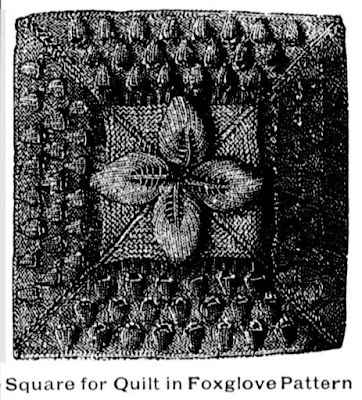 The link given for the pattern is to Trove, a very useful site which has lots of Australian newspapers and magazines (and other archive material) available for public access - you can find the Foxglove pattern here.

Lois was immediately convinced that the Foxglove pattern matches Susan Beaumont's bedspread exactly - and as the pattern was published in  Australia in 1886, after she had emigrated, we decided that she must have knitted the bedspread in Australia.

But then... I was looking for something else entirely in a 19th century book called Needlework for Ladies for Pleasure and Profit by 'Dorinda' when the words 'Foxglove pattern' caught my eye.  There was no illustration, but it was a pattern for a quilt square, and the instructions matched the pattern in the Australian newspaper word for word.  You can download the book from the Winchester School of Art library here - the pattern is on page 78.  I would never have recognised the pattern if I hadn't already seen the illustration, of course - the 19th century knitting books with no illustrations must have been very difficult to work from.

The Winchester School of Art copy is the 3rd edition, published in London in 1886, but according to the British Library catalogue, the 2nd edition of the book appeared in 1883.  So assuming that the foxglove pattern was also in the earlier editions, it's clear that the Australian pattern copied Dorinda's.  (But the Australian author did go to the trouble of knitting the square and creating the illustration.)   It is just possible that Susan Beaumont got
the pattern from the 1st edition of the book before she left England, and not from the Australian newspaper - I doubt if there is any way to tell now.

So we have found two possible sources for the square pattern in the bedspread.  Quite a few details are known about Susan Beaumont's life, too.  She was born Susan Holloway in Huddersfield in about 1840, and married William Beaumont in the 1860s. (In spite of its French origins, Beaumont is not an uncommon name in Huddersfield.)  He did various clerical jobs - he was a railway booking clerk in 1861, a book-keeper in 1871 and,  more specifically, a book-keeper to a cloth finisher in 1881, from the census records.  The Beaumonts then emigrated to Australia, arriving early in 1883, with their four children, aged then between 5 and 17.  Susan Beaumont died in 1911, in a small cottage at Blaxland, near Sydney, used by the family as a holiday home.

It is good to be able to tie all this information about the pattern and the knitter to the bedspread - the background story makes it in some ways more interesting than the similar bedspreads in much better condition about which nothing is known. And last month, Lois gave her talk on the bedspread and her conservation work on it, so now I can add my own part of the detective story.
Posted by Barbara at 16:12