An unusual jacket came to light in the Guild collection a few weeks ago.  The style is unusual - I don't remember any time when I've seen women wearing jackets of that shape.  And the yarn is unusual too - the surface of the fabric is covered in little curls of wool. 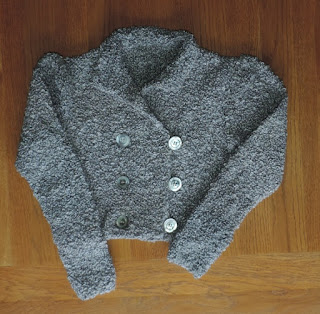 We know that the jacket was knitted in 'W B Kwiknit Astrakhan Wool' - helpfully, it has a ticket from one of the skeins attached to it.   I recognised 'Kwiknit' as a brand name of William Briggs & Co.  from the 1930s, because I have seen it on pattern leaflets. 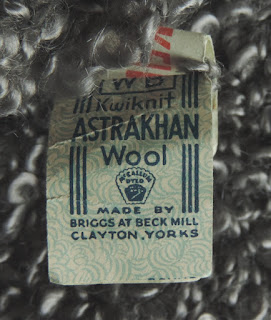 It would normally, of course, be very odd to leave a paper ticket (or nowadays a ball-band) attached to something you have knitted, but we discovered from the records that the jacket was knitted as a replica, specifically for the collection - it has never been worn, and the ticket was attached as an easy way to keep the yarn information with the garment.

I don't know how 'Astrakhan wool' was made - was the original fleece curly, or was the curl introduced in processing it? 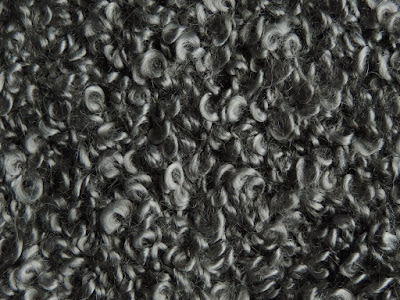 I looked through William Briggs leaflets that we have in the collection from the 1930s, and found the jacket pattern too.


So the garment was knitted quite recently, although the yarn and the pattern have both survived from the 1930s.

I don't think that the short-sleeved option illustrated on the leaflet would have been very successful.  The sleeves look too big and a bit shapeless, whereas in the long-sleeved version, the slightly puffed sleeve caps are balanced by the close-fitting lower sleeves.  And the astrakhan yarn is very thick, warm and heavy - not suitable for wear with a tennis outfit, I think.

While looking for the pattern, I found another tennis jacket which I think is a much more practical design, and very stylish.   It's also in Kwiknit, but the plain smooth wool, rather than the Astrakhan.   I think it would be much lighter to wear - the Astrakhan jacket is surprisingly heavy.  (I should check the weights given in the two leaflets when I can access the leaflets again.)


Back to our replica jacket.  The proportions may look a bit odd when it is seen laid flat - the shortness of the body makes the sleeves look too long, which they aren't.  It reminds me of early 19th century spencer jackets - very short waist and long sleeves, close-fitting except that they are slightly puffed at the top.  The sort of jacket that the Bennett sisters wore in Pride and Prejudice - and I am, of course, talking of the BBC TV adaptation, with Jennifer Ehle as Elizabeth Bennett and Colin Firth as Mr  Darcy. 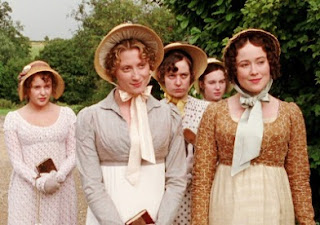 In the Guild collection, we have very few knitted pieces in wool from the 1930s - I think most of them would have been worn into holes, or unravelled and reknitted, during the long period of clothes rationing in the Second World War.  It's amazing that a jacket's worth of Astrakhan wool somehow survived unused though that time too.  So although it's a replica and not a 1930s original, we are very pleased to have it.