Today is the Queen's 90th birthday, so I thought I would show you what a 1926 baby might have worn,  (I had that thought before I broke my wrists, so fortunately had already scanned the images for this post.)


In the mid-1920s, babies were dressed in several layers of woolliness, at least according to the spinners of knitting wool.  (Possibly a biassed view.)  The Beehive booklet illustrated, for a 'Knitted Outfit for Baby' was I think issued in 1925.  (Although Patons and Baldwins had merged in 1920, the two parts of the company continued with their separate series of Beehive Knitting Booklets (Baldwins) and Helps to Knitters (Patons) for several years after that.)

The baby on the cover is (visibly) wearing a bonnet, a coat, mittens with thumbs, and a garment covering everything below its waist - 'overall drawers'.  There would be at least one more layer of wool underneath the visible layer. 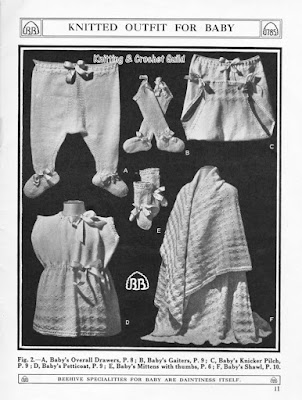 Altogether, the booklet has patterns for 15 garments:  a vest; a 'knicker pilch' (to go over the nappy); a petticoat; bootees and gaiters; three coats; a Dutch bonnet and a cap; mittens, with and without thumbs; overall  drawers; a shawl and a pram cover. 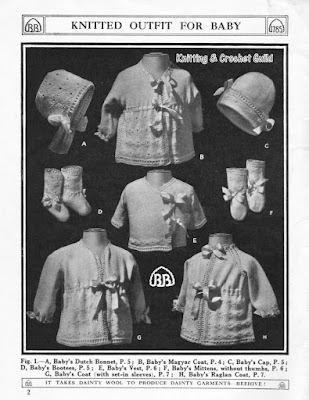 I assume that the booklet was intended to cater for both boy and girl babies, and I think that all the garments are intended for either, except that possibly the Dutch bonnet is for a girl and the cap for a boy.


And every single thing, apart from the shawl, is trimmed and fastened with ribbons, which would now be considered a strangling hazard, surely?

Most baby photos back then were taken indoors, often in a studio, and the baby was in a dress or wrapped in a shawl.  So we don't usually see the full range of baby clothes that they would be put into to go out in the pram, say.  But we can try to imagine 90 year olds, such as the Queen, David Attenborough (90 next month), and my aunt Beryl, as tiny babies all those years ago, and being dressed in an outfit like the one in the Beehive booklet.  Perhaps not quite so much woolliness, most of the time, except outdoors in winter.