One Thing and Another

I finished sewing in the ends of yarn on my On the Other Hand mitts a couple of days ago, and pressed them.  I wore them today at Lee Mills - it was very cold downstairs in the store downstairs, and woolly mitts were very welcome. 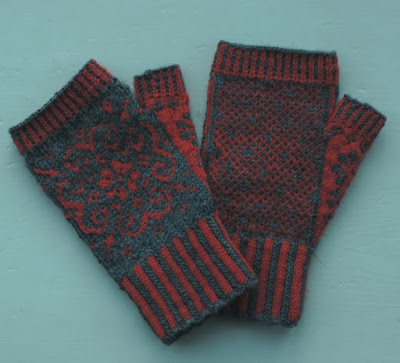 Now that the Mystery Knit Along is finished, I know that I chose Sarah's design for the cuff, and Ann's design for the hand.  (But did my own thing for finger and thumb cuffs.)   I'm really pleased with them - while at the same time thinking that lots of the other pairs in the Knit Along turned out even better.  (You can see photos of many of the finished pairs in Ravelry.)  A lot of people reversed the colours for the second mitt, which looks stunning, or chose different options for the two mitts.  The Knit Along was altogether a lot of fun, working through the pattern, and watching what other knitters were doing with the pattern at the same time.

I have also just finished a cabled scarf.  The photos shows it just off the needles - I plan to press it to get the cables to open out a bit.  More on that later. 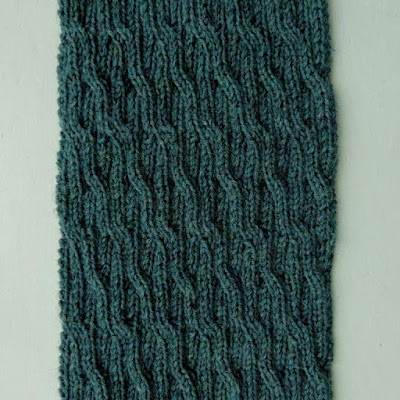 I used the same yarn for the scarf and the mitts - Wendy Merino 4-ply (fingering weight).  In fact, I used the same blue-green yarn for the mitts as for the scarf, because I miscalculated how much I would need for the scarf and was going to have some left over, and then chose the red (Rose) to go with it.  So now I have matching scarf and mitts.  The blue-green is called Pacific, though it reminds me more of conifers than sea.  It is very nice yarn, very soft, and Pacific is not completely solid, but is a mixture of blues and greens, with occasional surprising flecks of colours like bright emerald green and black.

Now I'm working on some small pieces in Swedish twined knitting for a workshop I'm doing next month - I'll report on progress later. 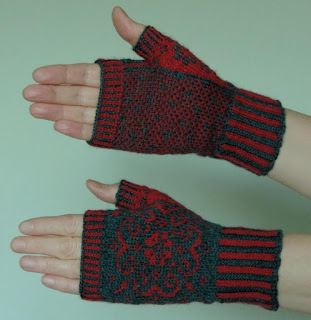