The Trunk Show goes to Birmingham

Angharad and I have just been to Birmingham for the weekend, taking a suitcase full of knitting and crocheted pieces from the Guild collection (Angharad) and another of tools, gadgets and publications (me).  They were selected highlights, designed to give an idea of what the collection covers, and we showed them to the Birmingham branch of the Guild at their monthly meeting on Saturday.

It was their second meeting in the new John Lewis store, above New Street station.  The store has a Community Hub, a room that's available for local groups to use, free - a wonderful resource for the city.   We restricted the trunk show to fifteen people, so that they could all sit around a table and have a close look at the things we had brought - cotton gloves provided.


Some of the pieces that we showed are favourites that we have shown several times, like the child's Fair Isle cardigan bought in Jenners in Edinburgh in the 1930s.  But we try to include some things that we have not shown before - on Saturday, we showed Kaffe Fassett's Citrus Pyramid jacket for the first time.


The daffodil doiley travelled safely in its pizza box, and arrived with the daffodils uncrushed.


Another new item was a 1950s sleeveless top, knitted sideways in a mauve yarn with a silver metallic thread running through it.  It was donated last year by the daughter of the woman who knitted it.  It came with a photo of the knitter wearing it (off the shoulders) in 1958 and looking very glamorous.


We stayed on Friday night with Janet, the convenor, and I stayed on Saturday night too - the prospect of a Birmingham balti was irresistible.   And on Sunday, Janet and I went to the Toft Alpaca Shop and farm.


We had coffee in the cafe, and browsed the patterns and the (delectable) yarns in the shop.  The yarn is mostly undyed, but there is a surprising range of colours.

And of course we wanted to see the alpacas, so went for a walk across the farm.  We were told that there were about 200 alpacas in the further fields - we didn't see that many, but certainly quite a lot. 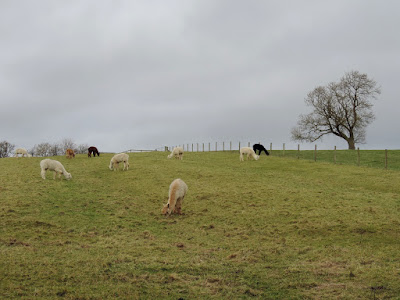 We had a very nice lunch in the Dun Cow in Dunchurch, the nearby village, and then I came home. It was a really good weekend.  Thanks to Janet for her generous hospitality, and to the Birmingham branch for providing an enthusiastic and appreciative audience.

The Birmingham Guild meetings are open to everyone - you don't need to be a member of the Knitting & Crochet Guild.  If anyone would like information on future meetings, you can email Janet:  janetwcollins at outlook dot com.