On the Other hand

We are in the first week of the On the other Hand Mystery Knit Along fingerless mitts, so we are knitting the cuffs.  There is a choice of a corrugated rib cuff, or a corrugated rib  and lice cuff (which at least one person taking part thought was a typo, perhaps for corrugated rib and lace - but no, in Norwegian designs, lice are individual stitches of a contrast colour.)  One of the choices was designed by Ann Kingstone and the other by Sarah Alderson, but we don't know which is which.  (Guessing is allowed, though.)

I chose the corrugated rib cuff,  I haven't knitted a corrugated rib before, as far as I remember, so that seemed quite adventurous enough for now.    Here's the first cuff: 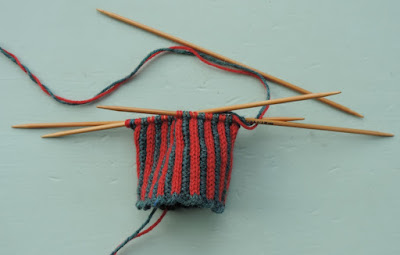 I've just bought some more needles, so that I can knit the second cuff this week too.

The yarn is Wendy Merino 4-ply, in Pacific (a dark blue-green - the main colour) and Rose (a soft red).  I watched Ann's Periscope broadcast, now uploaded to YouTube, on Shade contrast in stranded colourwork knitting, where she says that it's not enough to choose different colours - you also need them to be sufficiently different in shade, otherwise at a distance they won't be distinguishable.  I thought that the green and red I had chosen might not be a good shade contrast, so I followed her suggestion of photographing the balls of yarn and converting the photo to grayscale, so see how different they were.  And in fact the red showed up as much lighter than the green, so I think they will be OK.

I also watched Sarah and Ann's Periscope broadcast introducing the Knit Along.  They talk about our Huddersfield knit-and-natter group, where they came up with the original idea of having a joint knit-along.  The group is called Bitter and Twisted - we named it when we started meeting in a pub, where  there was the possibility that some of us might drink bitter, though I think that in fact none of us do.  (Twisted obviously refers to yarn.)  I remember them discussing various ideas for possible projects - I think that gloves were suggested at one point, but I'm pleased that it's simpler than that.

I intend to have finished both cuffs by Friday, when the next part of the pattern is due to be released.  I expect that both Ann and Sarah's choices will involve stranded colour-work, but that leaves a lot of scope.  It might be difficult to choose....