The last instalment of the On the Other Hand Mystery Knit Along was issued last Friday,  Lots of participants have already finished their mitts and posted photos to the Ravelry group, because Ann and Sarah are offering prizes, to be announced at 2 p.m. today.  There are some really beautiful finished pairs - lovely choices of colours, quite a few with different choices of options for the two mitts.

My mitts aren't quite finished - I still have the thumb cuff to do on one of them. 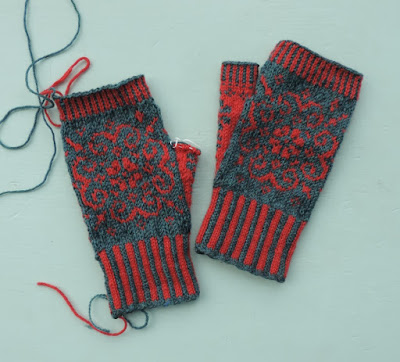 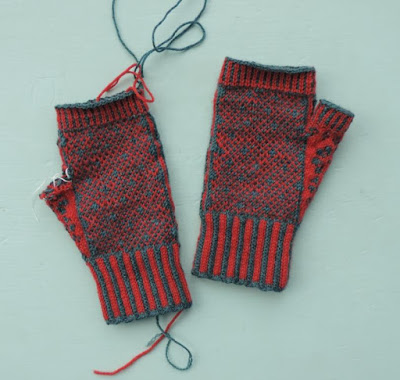 I'm really pleased with my mitts. Even so, the finished projects in the Ravelry group make me want to knit another pair and choose the other options and different colour combinations. But I already need to knit a pair of fingerless mitts for a workshop I am doing in April, and there is probably quite a low limit on the number of fingerless mitts anyone needs. (My daughter has already reached her limit, with the pair I gave her at Christmas, though she tells me that should I feel an irresistible urge to knit more, she has several friends who would be very glad to receive them. But I'm not sure I'm that generous.)

I'll post more photos of the finished mitts when they are completely finished. It's been such a lot of fun taking part in the Knit Along. Several other members of the Thursday knitting group at Spun have been taking part too - a sort of mini Knit Along. I've enjoyed picking the colours, choosing between the different options and guessing which option was designed by Ann and which by Sarah - I saw Ann last night, and she told me that my guesses were correct - they'll show their original samples in the Periscope broadcast, I believe, and also the second pair that each has knitted to the other's design. Hope I can get organised to watch it live.