Last week's Huddersfield KCG branch meeting was a trunk show of picture sweaters.  I took a large suitcase full of picture knits from the Guild's collection, along with bag full of pattern leaflets, books and magazines.   I mostly chose knits I was already familiar with, and several of them have already featured on this blog - the Postman Pat sweater, with its pattern; the Cherry Brandy sweater (sing-along optional);  the Mary Maxim jacket; the Willow Pattern sweater.  Here are some more.

Most of the picture knits and patterns I showed on Thursday were from the 1980s - the heyday of the picture knit.   (Though the Mary Maxim jacket is 1950s.)   Around 1980, sweaters with landscapes on the front were popular - I found several patterns as well as the sweater below. 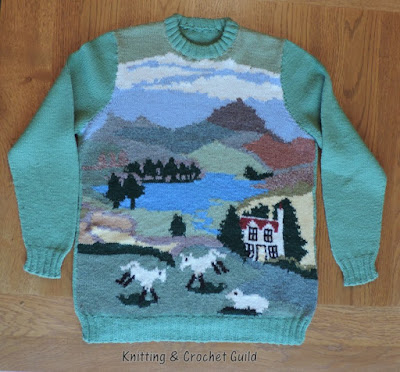 A lot of elements appear in several similar designs - there's a blue sky with white fluffy clouds, often some hills or mountains in the background, often a few trees (usually conifers); maybe some water, and sometimes a few sheep.  I showed a Hayfield pattern in the same genre here.

I also showed a landscape sweater of a very different kind, by Sandra Inskip.  We have three or four of her Yorkshire scenes sweaters, all knitted in the natural colours of British sheep breeds. I think this one, showing the Ribblehead viaduct is the nicest. 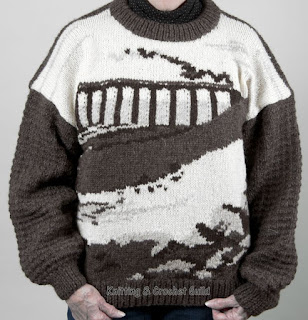 The flower-vase sweater below is a bit later, I suspect - 1990s?  I haven't seen a pattern for it, and I think it might have been knitted from a kit.  (But see my PS below.) 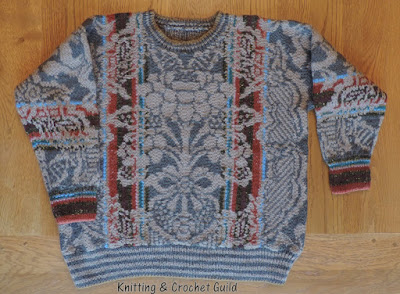 It's worked sideways, and I guess is intended to be done in stranded knitting.  But the knitter has woven in the colour not in use..... 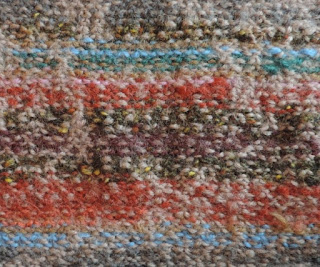 ...which gives an uneven texture on the right side.  I think it's quite an attractive effect. 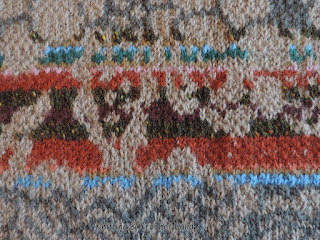 I like it very much - especially the unexpected touches of  bright colour, turquoise and pink.  If anyone recognises the design, I'd love to know.

I finished the show with a couple of seasonal knits. 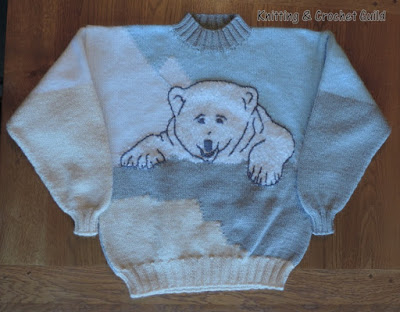 The polar bear sweater is from a Scheepjeswol kit.  To me the polar bear has a rather odd expression - as though he is grumbling about a mild toothache.  In case you miss the wintry theme, the back reinforces it: 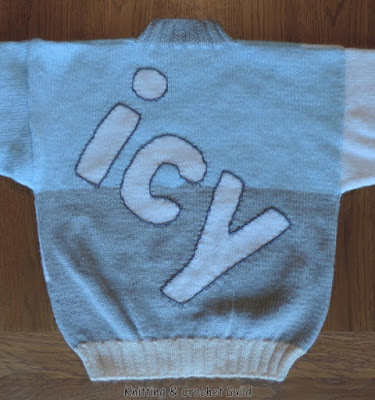 And finally, although we don't have any specifically Christmas sweaters in the collection, as far as I know, we do have a very nice one with a robin. 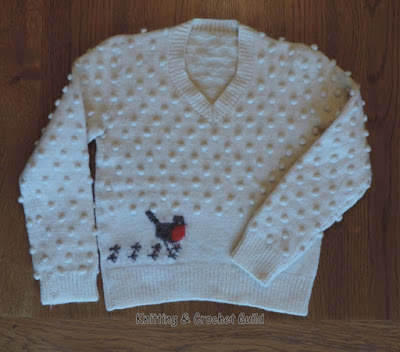 I guess the bobbles are meant to represent snowflakes.  The robin is done in intarsia, and the footprints are in stranded knitting... 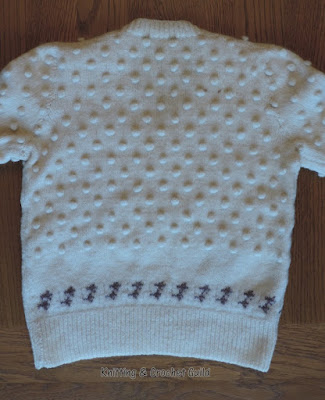 -- and continue all across the back.  Isn't that charming?  Again, if you recognise the pattern, please let me know.

PS Karie Westermann has suggested that the Flower vase sweater might be a Kaffe Fassett design.  And now I've searched though his designs on Ravelry  (should have done that before), I see that it's a design called Brocade.  I thought at first it was only very similar, because the main illustration on Ravelry shows a sweater knitted conventionally, not cuff to cuff.  But most of the Brocade projects on Ravelry are knitted cuff to cuff - so that more or less confirms it.  It's Kaffe Fassett's Brocade.  I would still like to know, though, whether the colourway in the collection sweater was suggested by KF or devised by the knitter.
Posted by Barbara at 10:39