A Christmas Card from Peggy

Last week, we had our Christmas lunch at Lee Mills.  There were nine of us - all regular volunteers working on the Guild's collection. We all brought a contribution of food or drink, and there were Christmas crackers - it was a good do.  (And the table in the office at Lee Mills used to be our dining table at home, so it was quite like old times - we have had many Christmas dinners sitting around the same table.)

One of the volunteers who came to the lunch was Julia.  She designed and made the Guild stand at the Knitting & Stitching Show in Harrogate, featuring "Peggy", a 1940s/50s figure, welcoming visitors into the stall, and Julia had made Christmas cards for us, each with a personal message from Peggy.   Here's mine: 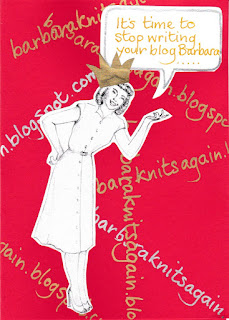 The message reads: "It's time to stop writing your blog, Barbara, and start on the Christmas log!" - the chocolate Yule log cake. So I thought I must show it here - it even quotes the web address!

For readers who didn't see the stand at Harrogate, here's Peggy as she appeared there, wearing a crocheted apron from the collection. 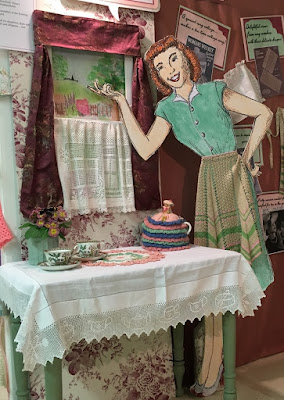 The lace curtain, tablecloth, tea cosy and doiley are also from the collection - it's one of my favourite doileys.   (The flowers in the pot and the giant wasp are also knitted or crocheted.) 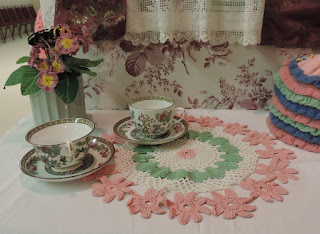 I should have written about the Knitting & Stitching Show earlier - it was at the end of November, and I was there for a while, on the Guild stall.  But I think it's not too late - Julia's display was splendid, and worth recording.  (To enlarge the photo, click on it.)

(The bunting that I wrote about here isn't visible in the photo, but it was there, just out of shot.) 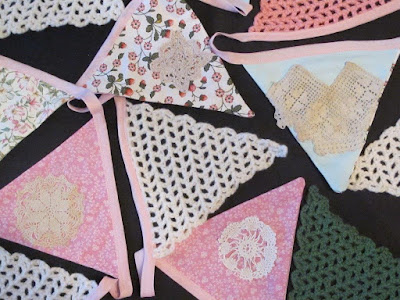