Last week, we had the monthly meeting of the Huddersfield Knitting & Crochet Guild branch.  The theme this month was casting on and casting off, hence the title: Cast Away!  (It works better in British English than American English, where the theme would be casting on and binding off.)  Angharad taught us some specialised methods, including tubular cast on.  That's a method that I have heard of and wanted to learn, but it sounded far too complicated.  But now I've tried it, and my cast-on edge is very neat - I feel quite proud of myself.

The first photo shows the tubular cast-on still with its provisional few rows of stocking stitch in waste yarn which you use as the foundation - the second row shows the finished edge after the waste yarn is removed. 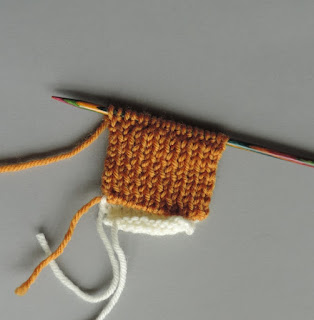 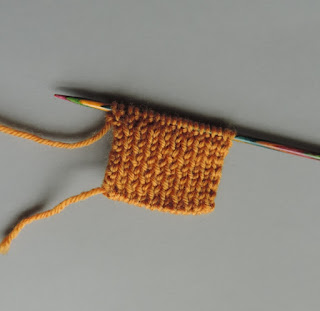 I am sure that I have seen tutorials on tubular cast-on in magazines and totally failed to make head or tail of it, but with Angharad showing us how to do it, it turned out to be very straightforward.  And she directed us to this YouTube tutorial by Eunny Jang as backup:


It makes a very stretchy start for single rib (and that's what my swatch is).   And there is not a definite edge as there is with the usual cast-on methods - it almost looks as though you just leap into knitting single rib with no preamble.

I finished off my swatch with tubular cast-off - Angharad's instructions were based on Montse Stanley's The Hand-Knitters Handbook (which I have).   It's a sewn cast-off, and I found it not so easy to keep the edge even and neat.  Needs more practice. 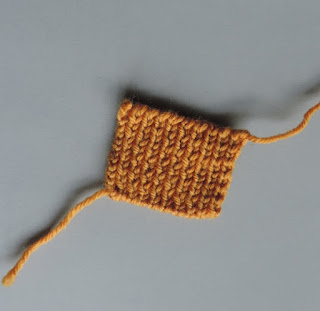 Angharad also covered grafting and three-needle cast-off, but I decided that successfully learning one new cast-on and (not so successfully) one new cast-off was quite enough for one evening.  In any case I have done a three needle cast-off before.  I was even wearing an example (the shoulder seams of my Boardwalk pullover) - although I didn't remember that until much later.

Altogether a very productive meeting.  Next month:  Granny squares.
Posted by Barbara at 12:32