On Saturday, we went for a wander around part of Holbeck, the area of Leeds just south of the railway station. Our main objective was to see the Temple Mill, a 19th century flax mill built to look like an ancient Egyptian temple.  It's an amazing place. 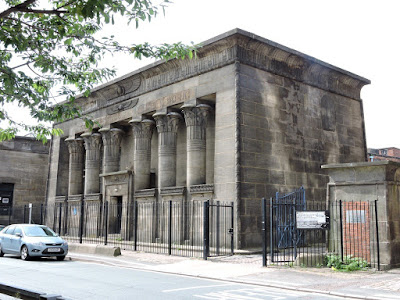 The office building (above) appears to be in good repair and is currently occupied, I think.  The main mill building next door is not.   From the outside, it appears to be mainly held up by scaffolding, but there are occasional open days when you can go inside, so it must be in a better state than it looks. (See here.) 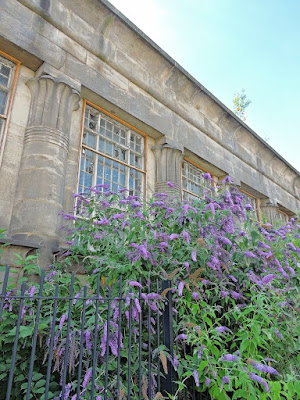 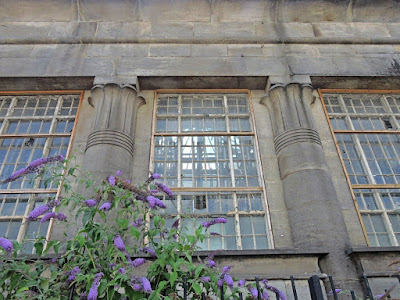 Behind Temple Mill, there is a large area than evidently was once covered by buildings (and probably will be again).  Meanwhile, the buildings have been demolished, and plants have taken over.  It was sometimes a bit surreal - for instance, the parking sign saying "Pay here at machine. Display ticket." next to a stretch of cobbled road that was completely inaccessible by car. (Just as well, as the ticket machine had been removed.) 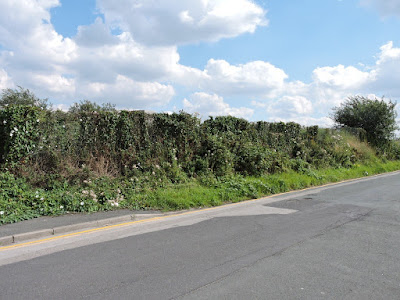 Round the corner, it was like walking along a country lane - no traffic, no buildings, hedges at the side of the road.   But in fact, the 'hedges' were chain-link fences covered in rampant bindweed, and the shrubs were mostly buddleia -  typical of urban scrub. 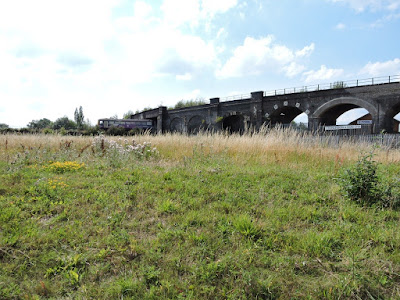 There is a tangle of railway lines in that area, running into Leeds City Square station.  here's two of the lines, at different levels, crossing each other, with a train on the lower level, and what looks almost like a wild-flower meadow in the foreground.

And all this was just a few minutes' walk from the centre of Leeds.  We walked back along the canal towpath - the Leeds-Liverpool canal runs into the River Aire near the railway station.  The canal runs parallel to the river for a stretch, with the towpath between the two, and giant hogweed, Himalayan balsam and rosebay willow-herb growing on the river bank. 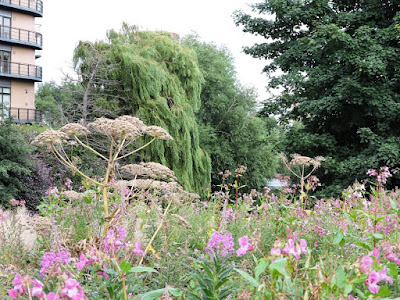 The area around the junction of the river and the canal has been redeveloped over the past few years, and is perhaps what the rest of Holbeck will look like in a few years - a mixture of new buildings and renovated old buildings.  And on a fine sunny Saturday, it was full of people sitting outside the cafes and bars, enjoying themselves.