I was looking for something else entirely when  I found this article about Shetland lace knitting in the Dundee Evening Telegraph from February 1893.  It is a fascinating account of the quality of the knitting then being done in the Shetlands.  (I have kept the original layout of the article, with random phrases capitalised as sub-headings, just because it looks so odd.)

Shetland lace work occupies a position all its own. There are not many people nowadays who are not acquainted with the dainty lace shawls made in Shetland, which are so suitable and so much sought after for evening wear. Some of them are indeed so fine that one would think a fairy's mantle had been found rather than an article that could be touched and worn. These

FINE LACE SHAWLS
are made all over the islands, but the island of Unst and Lerwick may be said to do the finest specimens. As a rule the knitters doing this fine work do little else, their hands requiring to be kept very smooth for working the delicate threads. The best wool only is used, and the carding and spinning are done by women, who make this work their chief employment.  Among all the varied specimens, however, one has just been made which is credited with being the

FINEST PIECE OF SHETLAND WOOL WORK
produced. This is a fine lace shawl, which presently on exhibition at Messrs Laurenson & Co.'s establishment, Lerwick, and which is valued at £40.  This shawl is made of white wool, of uniform colour and texture. It measures 2½  yards square, yet it only weighs 2¼ ounces, and can be easily passed through the smallest-sized lady's finger ring.  The prime cost of the wool used in it would scarcely be 3d, yet that has been made into

11,000 YARDS OF THREAD,
and as that is two-ply the actual length of the thread spun and used is 22,000 yards, or over twelve miles single yarn.  The number of stitches in it is estimated at 1,740,000. The patterns used are designed by the knitter, and come out well in this delicate piece of work, the two-ply thread of which is no thicker than the hair of the human head. The knitter of this gossamer-like fabric is a peasant girl belonging to the island of Unst, and to her must be given the credit of producing the finest piece a. knitted work ever manufactured. To her sister, who

CARDS AND SPINS THE WOOL,
no small amount of the credit must be given. The wool is very carefully picked, the quality being the best obtainable. This is taken and carefully carded with a common dressing-comb, and then spun with the greatest care on an ordinary spinning-wheel, and thus before the knitter gets the delicate yarn in her hand the 2¼ ounces of wool goes through a hand-wrought process which turns it into twelve miles of thread—a truly wonderful feat, and, unless seen in the finished state, can scarcely be credited.  This fine shawl is about

TO BE SENT TO THE CHICAGO EXHIBITION,
and it is to be hoped that it may be the means of opening up a demand for fine Shetland lace work. The patterns with which these fine lace shawls are embellished are various, and besides the usual stock with which every knitter is familiar, and which embraces the "wave," the "pearl," the "shell," the "branch," the "bell," the "diamond," the "puzzle," and later the " Jubilee Crown," &c., the better class of knitters fall on their own ingenuity in the production of patterns and designs. These patterns are varied, and in many cases do great credit to the designers. Plain crepe work, however, is now much wanted, and fetches good prices. Nearly all the knitted work done in Shetland is produced in the country districts. Different districts are noted for their

PARTICULAR CLASS OF WORK.
Thus lace shawls principally come from Unst, Fetlar, Dunrossness, and Lerwick.  Yell produces the finest stockings; finest underclothing from Northmaven; and wraps coming from the west side—the finest shading wraps being done in Lerwick.  It may be generally said that all Shetland women can knit.  From their earliest infancy girls are begun and practised in the use of the knitting-pins, and it is with pride that the beginner will, on completion, show the first pair of stockings or the first little shawl knitted all by herself. And

PROFICIENCY IN THEIR "ART"
grows with the knitter until it is astonishing with what speed and beauty the work is produced. Knitting, however, is little practised in Shetland as a pastime, but rather as a means of livelihood, and numbers of women in Shetland have no other means of support; but like many another calling it takes the most constant and untiring efforts to keep starvation from the door through the knitting of hosiery.  Those parties who give their attention to the knitting of the finer work have chance of better remuneration, but they are in the minority, and do not properly speaking represent

THE GREAT BULK OF THE KNITTERS
who do the ordinary work, and whose chances of remuneration at best are more or less a sort of lottery. As has been said, hosiery is knitted all over Shetland, the peasants being the great producers. Many crofters own sheep whose grazing is on the common scattald, and when these are unable to produce sufficient wool for the household, then wool must be bought, and in the long winter evenings all the female portion of the household are busy—one it may be carding, another spinning, or some one hurriedly getting through with a shawl which must be finished by the end of the week, to that something new may be commenced with a new one.

It's remarkable, and sad, that the knitter of the 'finest piece of Shetland wool work produced' is not named, and I don't suppose that she was paid anywhere near its £40 value.  The Chicago exhibition that the shawl was sent to, was the "World's Fair: Columbian Exposition", celebrating 400 years since Columbus crossed the Atlantic.  (It seems that the official inauguration of the exhibition was in 1892, although it was not open to the public until the following year, and clearly exhibits were still being gathered early in 1893.)

I would have liked an illustration of one of the stitch patterns mentioned in the article to go with this post, but they are either too unspecific, like the "diamond" or the "shell", or I've never heard of them, like the "puzzle".  There is no correspondence at all between the names of the stitches listed, and the Shetland patterns given by Mary Thomas in her Knitting Book (published in 1938), which include Old Shale, Print o' the Wave, Cat's Paw.  The "shell" pattern may possibly be the same as the Razor Shell pattern described by Mary Thomas, but it's impossible to say.    So instead, here's an illustration of a "Fine Shetland Shawl" from a pattern given in The Fancy Workbasket in 1886. 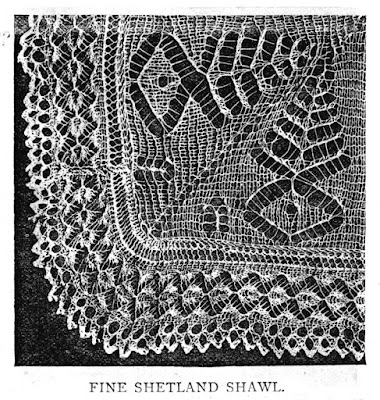