I finished sewing up a sweater just before the Knitting & Crochet Guild Convention, a couple of weeks ago.  In fact, I started it more than two years ago, in 2013.  I got most of it knitted that summer, and then put it away for the winter, because it's a summer sweater.  I didn't get it out again until this year, and then it sat for a while waiting to be sewn up.  But now it's done, and I've worn it, and it's turned out very well. 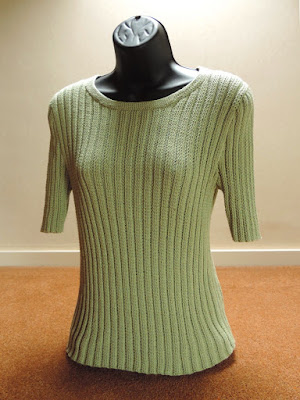 It's from a pattern leaflet designed by Mary Quant in 1965, in a collection of about 27 designs that she did for Courtelle knitting yarns (though I knitted it in cotton -  DMC Natura, which is 4-ply/fingering weight).   It appealed to me because it's a neat little sweater in an interesting stitch pattern (it's knitted in a twisted rib), and I like the neckline.

The rest of this post is technical stuff about the details of the original design and the changes I made.  So if you're not a knitter (and assuming that you've got this far), you might not want to read any further.

The stitch pattern is a knit 3, purl 2 rib, but on right side rows you knit into the back of the knit stitches so that they are twisted. The twisting tightens up the knit stitches, though overall the fabric is still very stretchy. The hem and cuffs are done in the same stitch, but on smaller needles. I think it's a really nice effect - the twisting gives it a lively texture. 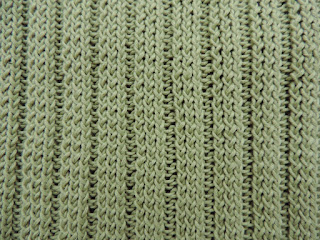 The neckband is knitted in twisted garter stitch, which I had never met before.  Unlike the twisted rib, the twisted stitches aren't evident, on either side of the work, but they give a much tighter fabric than plain garter stitch, and so a firmer neckband.

I made a few changes to the pattern:  I made both sleeves and body longer. In the original pattern, the sweater was intended to finish more or less on the waist.  The only shaping came from some increases at the sides after the first 6 inches of knitting the body.  I wanted my sweater to be longer, so I needed it to be hip-width around the hem.   So I started with more stitches than in the pattern, and then decreased for the waist.  But rather than putting the decreases at the side seams, I concealed them in the rib: I put the extra stitches in the purl ribs and then gradually removed them.  It's a very neat way of increasing and decreasing when you're knitting a rib stitch. The decreases are hardly visible on the right side, even if you know where to look, though they are more obvious on the wrong side.


I didn't do any increases above the waist - I decided that the stretchiness of the fabric would be  enough.  And it is.

It looks good, it's nice to wear.  I like the fact that it 's a cool and trendy Mary Quant design (only 50 years late).  Now for my other unfinished projects....