I have recently bought some vintage knitting needles, and I think they are the nicest straight knitting needles I have ever used.    The brand is Double Century and they have a plastic coating over a steel core.  They are very good to knit with.  The coating is smooth - but not too slippery, unlike metal needles. They don't bend, unlike plastic or wooden needles.  The steel core gives them a satisfying weight, although perhaps some people might find them too heavy.  And the points are just right  - not too blunt or too sharp.

The name and other details are incised into the plastic, and I think that originally the lettering was filled in with some black substance.  A few of the Double Century needles in the Knitting & Crochet Guild collection still have the inlay (see photos), but it has usually worn off.

After "The Double Century" there is a patent number, and on the other side of the needle, "English Made" and "B.G." for "British Gauge", I think, and then the size.  The coating of the needles is always a cream colour, to imitate bone or ivory.

The patent, for "Improvements in or relating to Knitting Needles, Crochet-hooks and the like" was applied for in 1913 by Emily Doubble, widow, of  "Knole", Harpenden, Herts.


"This invention relates to knitting needles, crochet-hooks, and the like of the kind which are made of vulcanite, ebonite and such like pliable material, the object of the invention being to lend a stiffness to the hook or needle when in use.

It has been found the knitting needles, crochet-hooks, and such like appliances of domestic use when formed of ebonite, vulcanite or other material, though possessing a desirable smoothness and silence in working, are apt to become soft and to lose their stiffness when held in the hand for any length of time, owing to the heat of the hand softening them.

According, therefore, to this invention, I reinforce the needle, crochet-hook or the like by imbedding a core of stiffening material ... to increase its rigidity.

In one manner of carrying out the invention as applied to a knitting needle, a steel wire is imbedded in the centre of the needle when the same is in a liquid or semi-liquid state, the reinforcement being entirely covered at the pointed end of the needle..."

I have been trying to find out more about Emily Doubble, and how her patent led to my knitting needles.  She  seems an unlikely inventor.  In the 1911 census, she is recorded as living at the same address as on the patent application, aged 72, and already a widow.  She had had 14 children, and living with her were two daughters and a son, all unmarried.  The son, Theodore William Doubble, must surely be the T.W. Doubble, Chartered Patent Agent, who is also named on the patent application - his occupation in the 1911 census is engineer, so he seems a much more likely inventor than his mother.

Then there is a gap after 1913 when the patent was granted, and 1945, which is the date of the next reference I have found to Double Century needles.

They were advertised in June 1945 in the magazine Home Chat as "The Knitting Pins with a history and a future."   Evidently the manufacture of Double Century needles had been suspended during the war, and in 1945 they were still not available. The ad says "The Steel for their unbreakable centres has been needed for essential war work.  Soon they will be back for those insist on the finest knitting pins in the world."  Many ads with a similar message appeared around that time, saying "our product has not been available during the war but it soon will be".

The company making Double Century needles was James Smith & Son, in Redditch.  The town had a long history of needle-making, and the firms of Henry Milward and Abel Morrall (makers of Aero knitting needles) were also based there.

When I first saw this ad, with the date 1698, I thought that Double Century referred to the age of the company, i.e. more than 200 years, and thought that the name might have been introduced in 1898.  But surely it is not a coincidence that the brand name is Double Century and the patent was granted to Emily Doubble?  What is the link between a widow living in Harpenden, and a needle-making company in Redditch?   It's very mysterious. 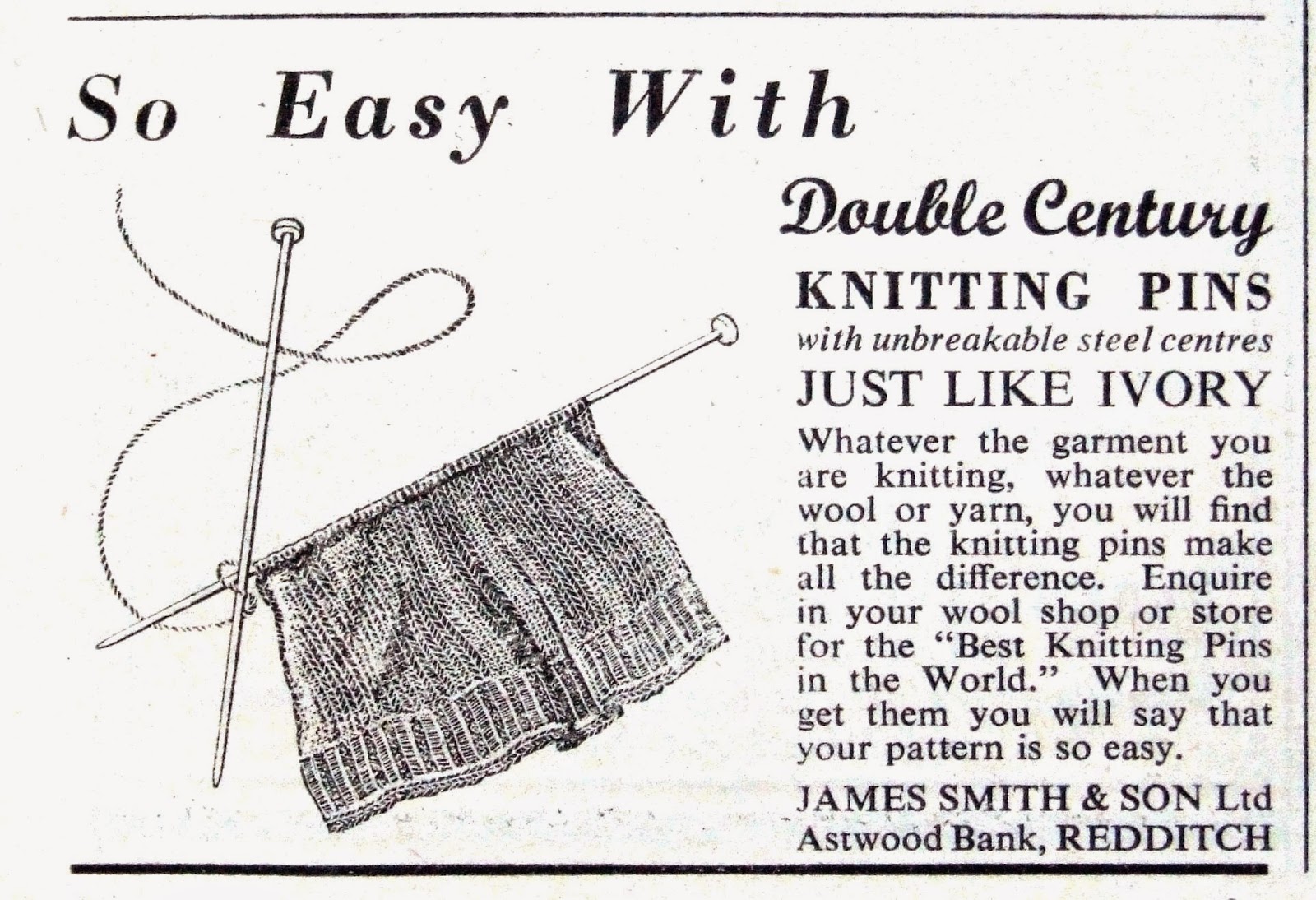 By 1950, steel shortages were past and you could buy Double Century needles without any problem. An ad in Needlework Illustrated claims that they are "Just like ivory" (because of the colour and feel, I suppose) and the "Best Knitting Pins in the World".  I might not go so far as to agree with that, but they are certainly my favourites just now.   If I find out more about their history, I'll let you know.
Posted by Barbara at 15:53