I mentioned a while ago that I had spent a day in the British Library in London, reading bound volumes of Woman's Weekly from the First World War, looking to see how the magazine was helping its readers cope with the war.  I was expecting to find patterns for knitted comforts for soldiers and sailors, though there were not very many of those.  But there were articles on war work for women, and later in the war cookery features on how to cope with food shortages.

One thing that caught my eye was a crochet pattern, aimed at readers who had a sweetheart or a brother in the Army. It appeared in the March 24, 1917 issue, and is headed "The Latest Crochet Handbag - Make it in the colours of “his” regimental ribbon."

The illustration with the pattern is, of course, not in colour, and the description begins:


"I wish I could show you on this page the delightful blend of colours used in the making of this bag.  It is quite of an Oriental tone; but now that everything of note is regimental, many of you will prefer to use the colours of the regimental ribbon in which you are particularly interested. You can arrange the colours any way you wish.  A few strips of each colour in turn can be worked, or the bag can be divided into the number of colours required, so that there is an equal number of each. Or you can begin with a neutral colour, such as Navy blue or black, to match your costume; then have a band of the regimental colours near the top, finishing with the main colour as at base of bag.... Quite a medley of colours was used for the bag illustrated, as follows:  Bright red, Royal blue, emerald green, cinnamon brown and gold."

I decided to try to make one, to illustrate my talk  "Useful Work for Anxious Fingers - Knitting and Crochet in the First World War".   We have a few pieces of WW1 crochet in the Guild collection at Lee Mills, but it is all household crochet, in white.  This handbag would be a nice contrast - and I have just finished it. 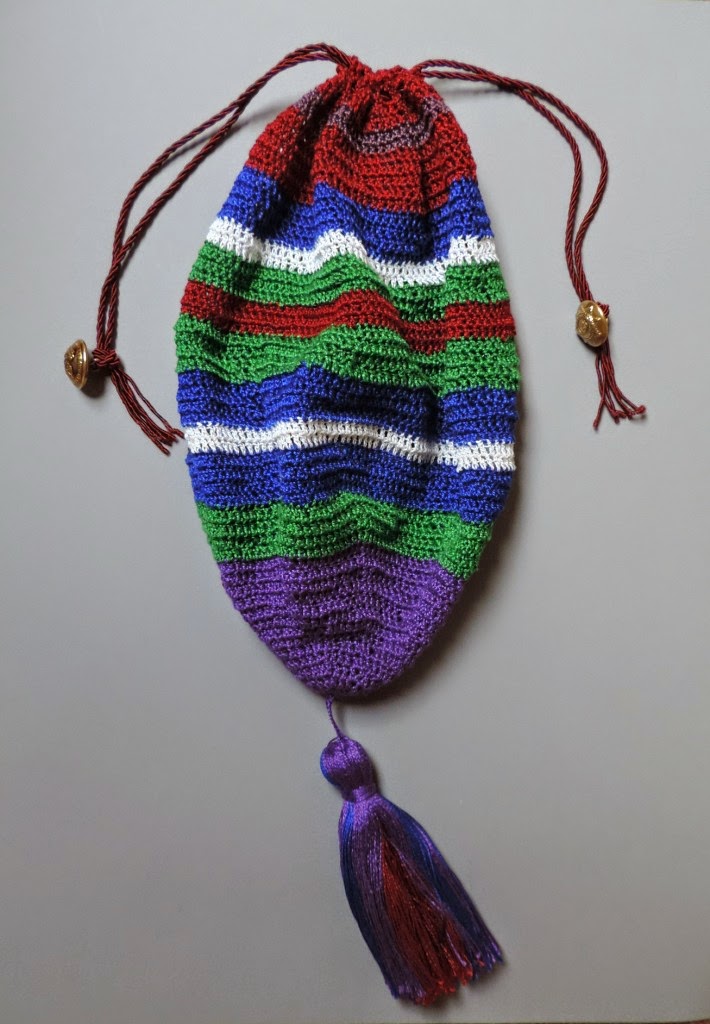 It was a bit of a challenge to make.  The pattern specifies "Star Sylko No. 8 with a No. 4 steel hook"  ("but of course, those who can afford real silk will do so.")  Star Sylko was a crochet cotton, and I made the assumption that 'No. 8' would mean the same now as it did then.  I bought a mixed selection of Anchor crochet cotton, No. 8, which is fine and slightly shiny, and I think it has worked out very well.  I have no idea what size a No. 4 crochet hook was, so after consulting a couple of modern books with patterns for fine crochet, I chose a 1.5 mm hook.

I have never crocheted anything so fine before.  In fact, as I said in a post last December, I hadn't done any crochet until then for 30 years or so, and then only in double knitting wool. And in December, I had to sit with 'How to crochet' instructions next to me - I couldn't remember how to do doubles, trebles, etc.  So  I wasn't at all sure that I would be able to make the bag successfully.  The pattern did say  "IT IS JUST CROCHET IN CIRCLES AND SO EASY TO WORK!"  which was somewhat reassuring, but even so, when I managed to crochet fairly evenly after a bit of practice, I was pleased and relieved.

As usual for patterns of that date, the instructions aren't very precise about measurements.  After you start decreasing towards the top, the pattern says you should continue until it measures 6 inches across the top, laid out flat, or "until long enough".  In fact, it is more than 6 inches across the top, but I did decide it was long enough, and it's possibly a bit longer than shown in the illustration.  (The tassel should be the same size in both.)  My drawstrings are not as long as in the illustration, but I thought that the bag would be worn over the wrist, and so I have made mine a suitable length for that.

And I did choose regimental colours, as Woman's Weekly suggested.   Royal blue, green and white, are, I believe, the colours for the King's Own Yorkshire Light Infantry.  My grandad, John Potter,  was in that regiment in the First World War.  (The other colours, claret and purple, are intended as a background.)  I've also attached  Army buttons to the drawstrings, following the pattern.  They are the right era, but not KOYLI buttons, I'm afraid.

I'm not sure I'm ever going to use it as a bag, but it will be on show several times over the next few months when I give my talk.  I certainly couldn't use it as an everyday handbag, when I think of all the things I carry around with me -three sets of keys; mobile phone;  packet of tissues; lip balm; purse with money and debit & credit cards; bus pass; wallet with assorted shop & cafe loyalty cards, library cards, etc.; mirror.  Etc.

What did women carry in their handbags in those days?  I consulted The Secret History of the Handbag and found a cartoon from the early 1910s, of an elegant lady with a huge leather handbag over her shoulder, and the rhyme:


Elsie, why this monstrous bag?
Don't you think it rather swanky,
When you know that it contains
Hairpins, powder puff, and hanky?

So there you are.  It would be a perfectly adequate little bag for those things, with room for a small money purse as well.
Posted by Barbara at 11:24