Last week at Lee Mills, I was searching for Emu pattern leaflets designed by Mary Quant.  She did two collections of knitting & crochet patterns for Courtelle, in 1965 and 1966, and Emu was one of the spinners involved.  I found one of the Emu patterns a few months ago, but I know there should be about 5 more.  I looked in the Emu boxes that we have already sorted - nothing there.  So last week, I searched the four boxes of Emu patterns that we haven't yet sorted.  And I still haven't found any more.

It was disappointing, but not altogether surprising. Even though we have upwards of 50,000 different pattern leaflets (that's my current estimate), that still means that there are a lot that we don't have.  And the leaflets in the collection have almost all been used, so that it's representative of what knitters and crocheters chose to buy.  We are most likely to have the leaflets that sold well.  Although the Mary Quant patterns were stylish and fashionable, I suspect that they didn't sell in large numbers.  They would appeal to young women who wanted to make themselves a high-fashion outfit cheaply (or who could persuade their mothers to make one for them), but that might have been quite a small constituency.  And there were 27 leaflets in each collection to choose from, which would reduce the number of potential buyers for each one still further. 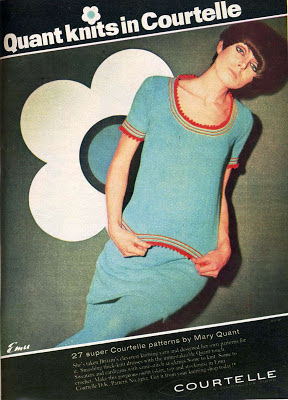 Even so, I did hope to find more - especially as I have seen an ad for another of the Emu patterns, which you might expect to increase sales.  (That's what advertising is for, right?)

My fruitless search for Mary Quant patterns wasn't wasted effort, though. While I was looking for them, I did some rough sorting and in the process, added to my small collection of patterns celebrating the Queen's Silver Jubilee in 1977.  After that, I finished sorting the Emu patterns from the 1940s and 1950s (about 500 of them) - I'll write about the 1940s patterns another time.

And I also sorted some Sirdar patterns, with some Huddersfield University students who are working at Lee Mills, and another Roger Moore pattern turned up.  (I don't think the pipe suits him.)