We have been on holiday (again!),  this time a quick tour of ancient sites in Turkey (Ephesus, Troy and Pergamon), the Gallipoli peninsula and some of the cemeteries and memorials from the Gallipoli campaign of World War I, and finally a couple of days in Istanbul.  We had a great time, and plan to go back to Istanbul.    Here is a tiny and fairly random selection of some of the hundreds of photos that John took while we were there.

In Istanbul, we saw two of the world's great buildings, Hagia Sophia and the Blue Mosque, and at Ephesus, we saw the remains of one of the seven Wonders of the (ancient) World.  When I was a child we had a circular jigsaw of the 7 Wonders of the World, and I did it several times, so I know them by heart.  Ephesus is the first of the seven sites that I have visited, though since there is only one (reconstructed) column left standing of the Temple of Diana, it is not very wonderful these days.  (But it did have storks nesting on top, which made it more interesting.)

I didn't take any knitting with me - there wasn't time for it in the tour schedule.  It wasn't a restful holiday at all, in fact, but a great experience even so.
Posted by Barbara at 17:58 1 comment: Links to this post 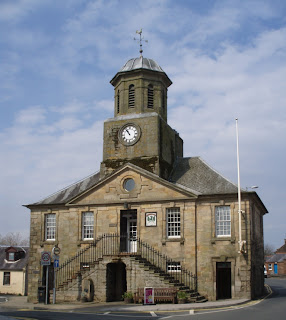 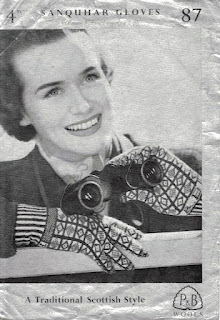 So what happened next?  When and how did Sanquhar gloves get more widely known outside Scotland?  How did they get to be so popular in Japan?
Posted by Barbara at 17:22 No comments: Links to this post

We have been on holiday in Galloway once again, as last year at this time.   Our walking group went for a long weekend,  and we stayed for a full week.  We had a busy week, but I'm going to write about just a few of the things we did.

The Scottish National Museum of Costume is in Galloway, at Shambellie House near the village of New Abbey.  We went there to see the current exhibition, of women's clothes from the 1940s and 1950s by Horrockses Fashions.  Horrockses' made printed cotton, and made it up into a range of upmarket fashionable clothes for women.

Some of the prints were designed by well-known artists such as Graham Sutherland. Many of the prints in the exhibition were designed by  Pat Albeck, who was employed by Horrockses straight from college.  I remember her name from the 1960s and 1970s when amongst many other things, she designed Daisy Chain,  a very popular John Lewis furnishing fabric - we had a plastic-coated  tablecloth in Daisy Chain for many years.

Back to Horrockses:  Most of the items in the exhibition were dresses, with small waists and full skirts.   I especially liked the sundresses with little jackets or boleros to wear over the top.  It was fascinating - many of the prints were very attractive, and the construction of the clothes often used the print  very cleverly (as in dress on the exhibition flyer).  Although my mother never had a Horrockses dress as far as I know (they would be too expensive) the dresses in the exhibition did remind me of the ones she wore in the 1950s.

As it happens, my sister gave me a book on Horrockses Fashions a while ago by Christine Boydell, who subsequently curated the exhibition  - so for once I had the book before seeing the exhibition. 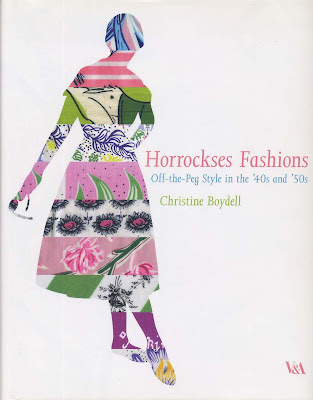 After visiting Shambellie House, we went to the walled garden in the grounds. It originally produced vegetables for the house but is now run separately as an ornamental garden and nursery.  We visited three years ago, when it still appeared not quite finished, but now it looks very established.  When we were there, there were clumps of a  double wood anemone, pure white, in full bloom all over the garden.  It was flourishing both in the shady areas, as you would expect, and in full sun, alongside paths.  I coveted it extremely.  There were none for sale, but the knowledgeable and helpful woman who owns the nursery told me where I can buy corms.  I bought a dark purple Geranium phaeum instead.

New Abbey itself is also worth a visit - the ruins of Sweetheart Abbey are impressive.  (You can look up the story of the name, which is either touching or a bit gruesome depending on your point of view.)   And there is a very nice cafe next to the Abbey.
Posted by Barbara at 17:14 No comments: Links to this post 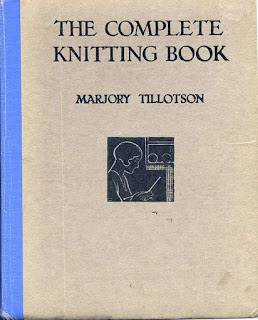