About a year ago, I wrote here about Elizabeth Forster,  a designer who seemed to be almost completely unknown, but by her own account in her book, The Wandering Tattler, had designed knitting patterns for magazines and spinners over a long period.  I thought then that it would be difficult, if not impossible, to find out much more about her work, but fortunately I was wrong.  Although she died some years ago, she had kept a lot of paper work - files of correspondence, invoices and typed pattern instructions, as well scrapbooks of her published designs.  And all this material still exists, along with many of the made-up samples.  It has all been in her house, as she left it, and her friends who inherited it all are now trying to sort it all out and match the garments with the patterns - and contacted me when they saw what I had written in this blog.

At the end of March I went to visit them and see the collection - I was very excited at the prospect, and it was absolutely fascinating. There are 60 dresses alone, as well as suits and coats, and probably more than a hundred jumpers and cardigans - and these represent only a fraction of her designs. 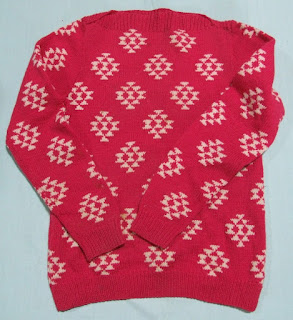 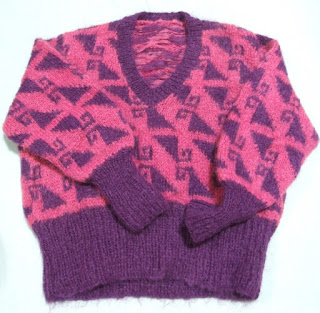 She was designing knitting and crochet patterns  from 1947 into the 1980s, so there is a huge range of styles and fashions in her work.  For some of the garments, the best that you could say is that they are of their time - such as the knitted knickerbocker suit.   But none of them are boring - they all have some interesting detail.  Many of the designs, like the two jumpers I photographed, have two-colour geometric patterns that are evidently based on things she saw on her travels, as she described in her book. 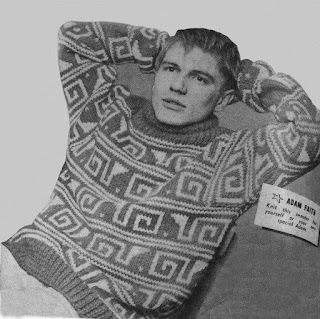 Two favourites from Elizabeth Forster's scrapbooks:  one is from the Daily Mirror in 1960, with Adam Faith wearing a jumper that she had designed.  (For younger readers, Adam Faith was a pop star, back then.)  The caption reads "Knit this sweater for yourself or your own special Adam." 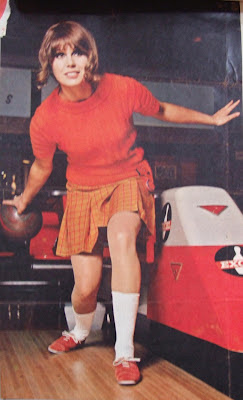 The other appeared in Woman's Own in 1967, and was modelled by Joanna Lumley.  The original jumper still exists in the collection. It was apparently made in one piece, with the ribs that are vertical on the back and front becoming horizontal in on the sleeves - not all of the designs are 'ethnic'.


Elizabeth Forster became a full-time freelance designer in 1956, in her late 40s.  Thereafter she spent 9 months of the year designing, to supplement her BBC pension and fund three months travelling and bird-watching every winter.  She always travelled independently and rarely booked any accommodation before she left home.  She especially loved the Himalayas, and trekked to Everest Base Camp when she was in her 70s - altogether she must have been a remarkable woman.  She died in 1995 at the age of 87.


She was a prolific designer, and employed a small team of knitters to put her ideas into practice.  Her designs appeared in many magazines and newspapers including Woman's Weekly, Woman and Woman's Own, as well as designing for spinners, especially Wendy Wools.  It is sad that her work, and that of other designers, was unacknowledged at the time and so is now almost unknown.  During my visit, I could only skim through the files of correspondence, but that was enough to find out quite a lot about the knitting business of those days and the relationships between designers, spinners and magazines.  There is a lot more to be discovered from Elizabeth Forster's archive, I'm sure.  Her friends hope to find a permanent home for it, accessible to anyone interested in the history of knitting and crochet.
Posted by Barbara at 18:20