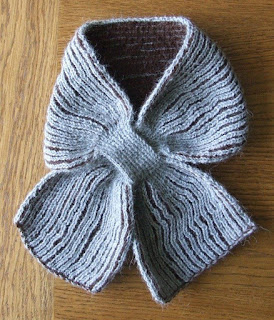 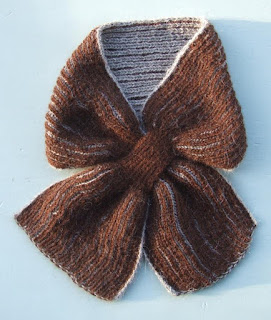 I finished a small scarf earlier this month, a slightly late Christmas present for my sister-in-law. It is reversible, so you can wear it as either mostly grey or mostly brown (it is intended to go with a camel coat).

It's knitted in two-colour brioche stitch, where you knit each row twice, once in grey yarn and then again in brown yarn (using double-pointed needles so that you can slide the work back and forth). So you get two interconnected layers, one in each colour.

The 'keyholes', where you loop one end of the scarf through the other, are made by separating the grey stitches from the brown and knitting with each set separately for a while. So there is no decreasing involved - the work is narrower there just because you are only using half the stitches at once.  Very cunning!

The yarn I used is Artesano alpaco in 4-ply - very soft and very light. The scarf took only 30g of each colour. And because the main part of the scarf has the two layers, it is very cosy.

Technical stuff follows.  The starting point was Nancy Marchant's It Takes Two pattern from Designer Knitting (the international edition of Vogue Knitting) in Winter 2010/11.  The original scarf was in S- and Z-twist brioche stitch, but Nancy Marchant recommended that you should practise the simple brioche stitch first.  I couldn't understand the instructions for the S- and Z-twist stitch, so I stuck with the simple one.

The scarf in Designer Knitting was knitted with Noro Silk Garden Sock Yarn, which I assumed would be about 4-ply, so I chose the alpaca yarn as a substitute.  But the pattern specified 4mm needles, which I found much too big - I used 2.75 needles and more stitches to get a fabric I was happy with.

The pattern specifies Two-colour Italian cast-on, and I found a tutorial on YouTube.  But I found that the cast-on edge is not stable until you have worked the two foundation rows (one in grey, one in brown) and after several attempts it was impossible to get a neat edge.  So instead I used alternate cable cast-on, which is one I often use, adapted for two colours of yarn (and on 4mm needle to make it loose enough).    In that method, when you make a new stitch  you put the right needle behind both loops of the first stitch on the left needle (that's cable cast on).   In alternate cable cast on, the right needle goes alternately from front to back and from back to front.   It makes a good stretchy edge for rib or moss stitch, and in this case,  you can switch between grey yarn and brown yarn and get a neat edge with is mostly grey on one side and mostly brown on the other.

When it came to finishing, I used the standard cast off method, again on 4mm needles, but switching from knit to purl along the row.  The grey stitches are knitted and the brown stitches purled, so that the loops lie alternately to one side or the other.  It doesn't look identical to the cast on edge, but similar.

Altogether it was an intriguing knit.  I have not used brioche stitch before, but it evidently has lots of possibilities worth exploring.