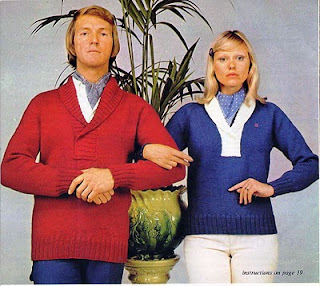 Until I worked out what was going on, I thought that all these duplicate pattern booklets would be a cataloguing nightmare.  But now, I classify them all as Lyric and that's that. So far I have found about 60 distinct booklets that were produced by Lyric, between about 1970 and the mid-1990s.  One advantage (to me) is that Lyric included the year in the copyright notice, so that unlike most pattern booklets, these can be dated. It still seems to be slightly underhand though - all the Odd Ounce booklets say on the front cover "Ideas by X for easy to make gifts and toys....", where X is Poppletons or Wendy or Argyll or ...      Not really true, though - "Ideas by Lyric that X  bought and put their name to" would be more accurate.
Posted by Barbara at 17:40