I have been reading Knitting Fashions of the 1940s by Jane Waller, borrowed from the library. It was published in 2006, but has patterns (more than 50) adapted from sources published in the 1940s - pattern leaflets, and magazines such as Stitchcraft and Woman and Home.   The modern versions are mostly knitted in 4-ply, and are very close to the originals apart from being larger, to fit modern women, and longer. 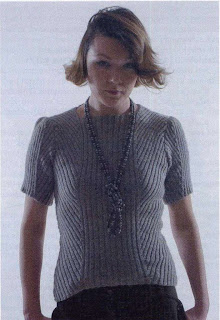 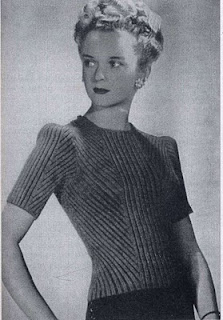 I particularly like one jumper in the book called Ribs are Smart, which I imagine is the original name.  I like the way that the construction of the jumper grows out of the diagonal rib stitch pattern. Jane Waller's version keeps the squared-off shoulders, though I suspect that the original model is wearing shoulder pads, so that her jumper looks more extreme.  According to Waller, the pattern appeared in a Needlecraft & Needlewoman leaflet that she dates to 1942-4.

When I saw this jumper, it seemed familiar, and I eventually realised that I had seen a similar jumper in another library book, The Sasha Kagan Sweater Book, published in 1984. 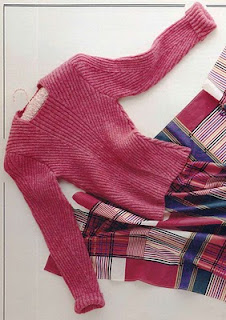 The sleeves of Sasha Kagan's jumper are long, but I think it must be based on the same original.  Kagan dates the original to the 1930s, but given the square shoulders, I think 40s is more likely.  Hers is knitted in 2-ply jumper weight Shetland.

Isn't it wonderful that a pattern can inspire later designers 40 and 60 years later, and that it can look good with minimal alteration so long after its original time?   It's sad though that we don't know the original designer who wrote the 1940s pattern.  Back then, pattern designers were anonymous - possibly it was someone on the staff of Needlewoman & Needlecraft, and producing a timeless, inspiring design was just part of the job.
Posted by Barbara at 10:16