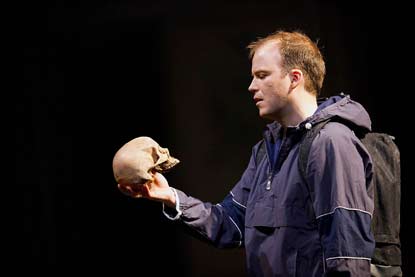 It's a great production, and it was wonderful to be able to see it in that way - the fact that it was live did make it a different experience  from a pre-recorded film.  At  the same time, we could see the actors in close-up on the big cinema screen, so in some ways we had a better view than we might have had in the National Theatre itself.   Rory Kinnear's performance made even the very familiar soliloquies fresh, meaningful and affecting - he gave a very convincing portrayal of increasing despair at the awfulness of everything.   It was so involving that at the end of the play when the actors took their bows, you felt like joining in the applause (and many people did, in fact), even though the actors were hundreds of miles away and obviously couldn't hear us.

And for the first time in two weeks or so, the temperature got above freezing. It stayed above freezing all night too, so almost all the snow and ice has gone.  So a good day altogether.
Posted by Barbara at 17:12