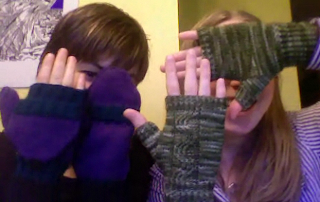 Now that Christmas Day is past, I can write about the things I made as surprise presents.  I sent my daughter and her girlfriend a pair of mitts each.  They are in Oregon, so we spoke to them via Skype on Christmas Day (evening here, before breakfast there).  We have webcams at both ends, so I could take a snapshot of them wearing their mitts.

One is a pair of convertible mitts, with a button-down top, in merino DK. 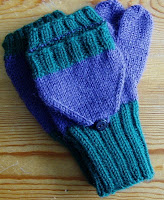 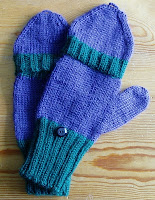 The other is a pair of fingerless mitts in Manos del Uruguay merino/silk DK. The pattern is Nalu, which is free on Ravelry.   I love the way that three stitches break away from the wrist rib, skid across the back of the mitt, and then end up soberly as part of the top rib again. 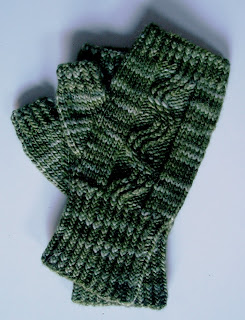 Both very successful, I think.

I asked J for something knitty for Christmas, but he said he wouldn't know what to choose, so I bought some yarn, put it in a gift bag and showed him on Christmas Day what he was giving me.  Who says romance is dead?  Apparently, I gave him a 4-volume regimental history of the 7th Hussars. 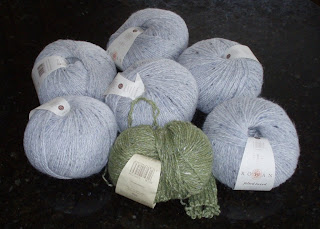 The yarn is Rowan Felted Tweed DK in Grey Mist.  I already had one ball in a soft green (Herb?) that I acquired two years ago when two Rowan people gave a talk on the company at the local Oxfam shop.  They handed out pairs of knitting needles with a ball of yarn and 20 stitches cast on, so that we could knit while listening.  They retrieved the needles at the end of the session, but we got to keep the yarn, and the perfectly pointless piece of knitting.  It is very nice yarn and good to knit with, so I have been looking for a use for one ball of Felted Tweed ever since.  (They also had a wicker basket full of odd balls of Rowan yarn that we were invited to help ourselves from, so I am looking for a use for several other single balls of lovely yarn, too.)


When I saw Louisa Harding's Little Cake  book, I liked many of the patterns and thought immediately that the Old Moor pattern would be suitable for my odd ball of Felted Tweed. It is designed for Willow Tweed,  which is also DK, so I think the pattern will be adaptable, and it uses one ball of a second colour.  So that will be my next project.
Posted by Barbara at 14:22