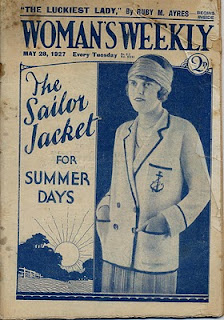 J went to a collectors' fair recently and brought me a copy of Woman's Weekly magazine from 1927.  It was a very well-chosen buy.   I remember Woman's Weekly from the 1950s and 1960s when my Grandma used to buy it (of course, it is still being published to this day), and I have bought a few copies from that era on eBay, out of nostalgia.  (I'll write about them another time).  They remind me of going to Grandma and Grandad's on Sundays for tea (which was always thin slices of bread and butter with tinned salmon, followed by tinned peaches and tinned cream, as far as I remember)  and playing cards in the evening on the chenille table cloth.  Woman's Weekly always had at least one knitting pattern, and so I was interested in seeing the patterns in older issues from the 1940s and earlier.  Post-war issues are available quite often on eBay, but I have not seen a pre-war issue offered for sale - I think most pre-war magazines went for salvage during the war.  So this was quite a find, and not very expensive.


It's interesting to see what women were reading 80 years ago.  There is some mild editorial grumbling about the fashionable shape for women and the prevalence of various extreme diets: "How long the present slim-line silhouette will continue, it is hard to say.  I think a new shape would be a pleasant change don't you?"  And, for anyone else who remembers Woman's Weekly from the 1950s,  Mrs Marryat was already advising in 1927.  As featured on the front cover, there is a knitting pattern for a sailor jacket: "For Tennis or for the Seaside Our Cover Design is Just Right".  It's a fairly straightforward pattern, mostly in stocking stitch, with a moss stitch border and  collar, and a navy blue crocheted edging.   But the odd thing is that the body of the jacket is knitted in one piece, on straight needles.  It is 44 inches wide (more than a metre) and you cast  on 283 stitches.