I have nearly finished the (modified)  Badminton jumper from Marion Foale's Classic Knitwear, which I described in a previous post.  As a reminder, the photo (taken from the book) shows what the original looked like. 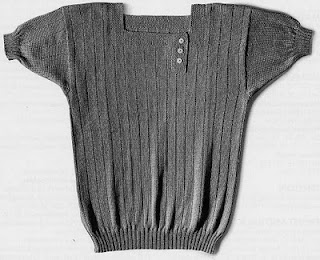 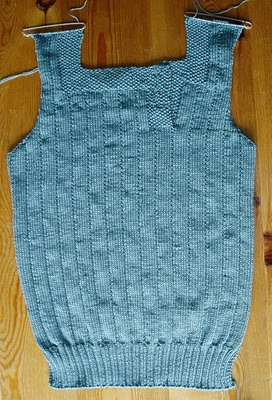 So far I have finished the back and the front.  That is already a radical change from the original pattern, because the back and front were knitted in one piece, starting at the bottom of the front, dividing around the neck for the shoulders, and then rejoining the two sides to continue down the back.  I can see why it was designed that way:  the square neckband is knitted at the same time, and knitting the back and front together avoids a shoulder seam in the neckband.   However,  I thought that the front (knitted upwards) and the back (knitted downwards) would look significantly different at the cast on and cast off edges, so I have opted to knit them separately, and I plan to do some sort of grafting to join the shoulders.

Another change involves the moss stitch neckband.  Although it is knitted with the rest of the front and back, the pattern calls for it to be knitted on smaller needles.  I did try a test swatch, and knitting straight rows while changing needle size part-way along the row is horribly awkward - the needle you are not currently knitting with has nothing to support it (unlike in circular knitting on double pointed needles) and so it waves about and gets in the way.

I could not see the point, either, of changing the needle size - another test swatch with moss stitch knitted on the same size needles seemed to work reasonably well. 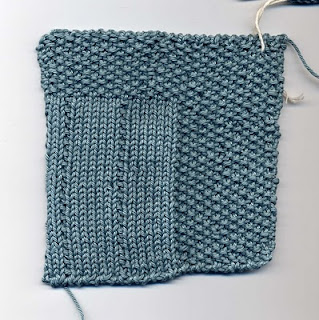 I also discovered,  in Liesl's Knitting Therapy blog, a quote from The Principles of Knitting, by June Hemmons Hiatt, that "Seed stitch [aka moss stitch] is 30% shorter than stockinette and 18% wider".  It's clear from the test swatch that the moss stitch band on the right is significantly shorter than the main fabric.  (Liesl is another Marion Foale fan and a moss stitch fan too.)   Knitting the neck band on smaller needles would surely make the match with stocking stitch worse rather than better, overall.

I am quite pleased with the neck-band so far.  I used a sewn cast-off method which gives a nubbly edge and looks quite similar to the moss-stitch selvages.  The corners are not perfectly square, but it will I hope be better once it's pressed. 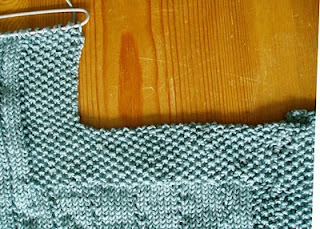 I have adapted the armhole shaping on the front and back for set-in sleeves, and I am now trying to adapt the sleeves to fit.   And then it will be nearly finished.