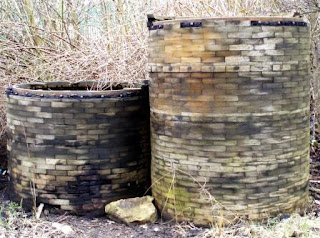 This part of West Yorkshire used to be well known for its woollen industry, and there are some companies still in business.  There are still many old mills everywhere - some of the surviving mill buildings have been converted into apartments in recent years.  Last weekend, John and I were in a little town near here and looking around the outside of a small mill that was built (according to the date stone over the door) in the mid-19th century.  John was admiring some old carding drums that had been left outside (he knows about these things). A man drove up while John  was taking photos and came over to talk to us.  It turned out that he was the owner of the building, and his family has operated a spinning business there for the past 50 years. He was very friendly and when he saw that we were interested, he asked if we would like to look around, and so we got a private tour of the mill.

He explained all the processes and started up the machines to demonstrate. The company works with natural fibres - mostly wool, some cashmere - and makes yarn mostly to be woven into cloth.  They do make some yarn for hand knitting as well - Shetland yarn, which is slightly bizarre considering how far West Yorkshire is from the Shetlands. In the rest of this post, I attempt to describe what the mill does -  I am sure that I have got some things wrong, so I apologise in advance. 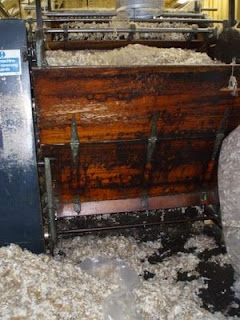 The raw material that they work with is wool that has been cleaned and already dyed.  When we were there, the machines were set up to produce yarn of a beige colour, so the wool that was going in  looked like a random mixture of natural fleece colours, but in fact the colours had been mixed in precise proportions to a colour recipe, to get the exact final colour that was wanted.

The different colours are mixed very thoroughly before going through the next stage of carding, where the wool is passed between rollers covered in  wired spikes, to comb the wool. 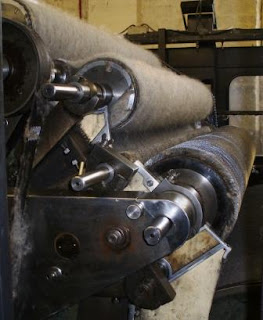 The wool goes through several carding machine, that gradually convert the clumps of raw wool into a smooth even web. The final machine in this stage cuts this web into strips and rolls each one to produce slubbings, which look like a single ply yarn, but have no strength at all.  The slubbings are wound onto huge bobbins, and then taken to the spinning machines. 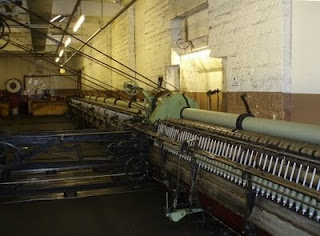 Finally, the slubbings are spun into yarn: they are drawn out and twisted, to give them strength, and then wound onto a bobbin.  Although the mill has other spinning machines, we saw one of their spinning mules in action.  This is old technology, but still effective:  the spinning mule was invented in the 18th century and these dated from the early 20th century, though they have since been modified. And of course, they are now operated by an electric motor, though 100 years ago I imagine they would have been steam-powered, and the first spinning mules were water-powered.

The spindles are mounted on the front half of the machine, that moves on rails.  It first moves away from the back on the machine, and a length of yarn is drawn and twisted, and then returns as the twisted length of yarn is wound onto the spindles.  Hard to explain, but I have found video clips of very similar machines operating in a mill in Maine here. I think that the spindles of yarn are the finished product as far as this mill is concerned, and the yarn is then sent elsewhere for weaving or to be sold as knitting yarn.

Our tour of the mill was fascinating - it was really nice of the owner to spend so much time with us.  The thing that struck me most, from the knitting point of view, was that the yarn is dyed before spinning and not afterwards. (John points out that it is "dyed in the wool" - hence the phrase.) That allows the finished yarn to be composed of fibres of several different colours. 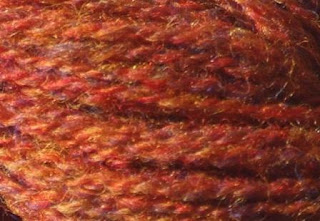 I looked at a skein of Shetland wool left over from a Fair Isle jumper I knitted many years ago, and the rusty red colour is composed of bright red (or orange), yellow and purple - maybe more.  I hadn't properly appreciated the subtlety of Shetland and tweed yarns before - I should do more knitting with that kind of yarn.  And of course, when I knit with Shetland yarn in the future I shall know how it was made, and think that it may have been spun in Yorkshire.
Posted by Barbara at 21:46