If you look at a lot of old knitting patterns and magazines, as I do, some of the models start to become familiar.  In a few cases, I can put a name to the face - for instance, Patricia Squires, who often appeared on the front cover of Woman's Weekly in the 1950s, modelling one of the knitting patterns in the magzine.  Some models are famous for other reasons - notably Roger Moore, who was a knitwear model briefly in 1952 before his acting career took off, and I have occasionally seen Joanna Lumley on 1960s knitting patterns.    But usually, these familiar faces are anonymous.


One of the models on 1940s knitting patterns is particularly noticeable because she usually wore her hair in a very distinctive heart-shaped style.  It reminds me of a medieval headdress (called I think a hennin, or possibly an escoffin).


She appeared on several Bestway leaflets in the late 1940s, and the hairstyle varies slightly, though her hair is always long, and almost always swept up.  (How would you get it to stay put without copious amounts of hairspray, which I'm sure didn't exist in the 1940s?)

She sometimes appeared on pattern leaflets for knitting wool brands such as Copley's....

She appeared in magazines, such as Woman's Weekly, too.

I kept seeing images of this woman, without knowing who she was.  But by chance, I found out some time ago, from a magazine in the British Library.   (This was of course in the Olden Days, when you could go to London for a few days and stay with friends. And visit museums!  And spend a day in the British Library!)  I've been collecting together some images of her since then, to show in this post. 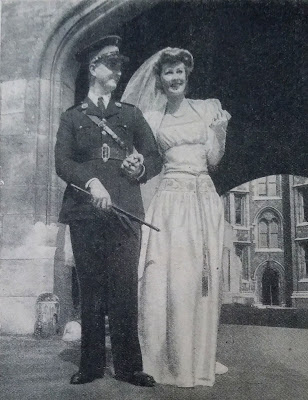 Woman and Home in July 1944 showed a photo of her wedding, with the caption:

"Do you recognise in this lovely bride the Joan Felce whom you have so often admired in our knitting pages?   Now you see her photographed with her bridegroom, Lieut. D. C. Nurse, of the Royal Marines - a handsome pair. "

Joan Felce must have been aware that her hairstyle had a medieval look, because it goes on to say:

"The beautiful, medieval-style gown was designed by the bride herself, and she had it in readiness for three years awaiting the bridegroom's return from Overseas.  So this is a story of patience and faith with a very happy ending!"

We are also told: "Her bridesmaids were two fellow Service women from the W.R.N.S." - the Women's Royal Naval Service, or Wrens.  From the end of 1941, single women could be conscripted into war service, and many joined the women's branches of the Army, Navy and Air Force.

I don't know how she managed to carry on with occasional modelling work while being a Wren. I assume that she was based in England - some Wrens would have been doing clerical work at the Admiralty in London.  She may even have been able to get leave, if modelling was considered important morale-boosting work, though that seems unlikely. In the summer of 1944, she appeared in a very appropriate feature in Woman magazine, which I found on the same visit to the British Library. It was a double page article "Woman plans a treat for a Service girl", and begins "When a Service girl comes home on leave she looks forward to a very special list of treats, her holiday aims are the little homely things which she can't get in Service life and which she hankers for all the more. She's been doing her part in the fight - let's see that the rest she so much deserves is the kind a Service girl would enjoy most of all."  In the rest of the article, Joan Felce is shown enjoying the prescribed treats - meeting her friends on the first evening, breakfast in bed, a picnic tea in the garden, a date with her boyfriend (though that wouldn't be possible if he was serving overseas, as Joan's fiancé had been).

Most of the pattern leaflets I showed earlier were published after the end of the war.  But I have not seen her on any leaflets published after the late 1940s, and I think that she must have then retired from modelling.  (Douglas Nurse had, happily, survived the war.)  I am pleased to have been able to put a name to one familiar face, though many others remain anonymous.

Copies of all the patterns shown above are free to members of the Knitting & Crochet Guild - email collections@kcguild.org.uk to ask.