I don't know who Mrs Leach was, or if she actually existed, but a lot of magazine titles were published under her name. A monthly magazine called Mrs Leach's Fancy Work Basket was published from 1886 until (according to the British Library catalogue) 1910. The first issue is headed "Practical Lessons in Art Needlework, Crewel and Crochet Work, Knitting and Embroidery". (The first volume of the Fancy Work Basket is available online from here, though be warned that it's nearly 500 pages.)

There were also other publications under the Leach's umbrella that weren't issued as part of a series.  One of these, Leach's Newest Jumpers, is in the Knitting & Crochet Guild collection and I have scanned it to create a pdf version for Guild members.  The jumpers in it were 'newest' in the early 1920s; the publication isn't dated, but I think it was published in 1921 or 22.

It is always exciting when we can identify the pattern used to create an item in the Guild collection.  One of the favourite garments in the collection is a filet crochet  jumper with a design of butterflies worked on it, and we realised last year that pattern that was used to make it is one of the cover designs in Leach's Newest Jumpers. The yarn specified in the pattern is a mercerised cotton, though we have assumed that the one in the collection is in rayon.

There are another ten patterns in the magazine - some knitted, some crocheted, some both.  The blue jumper on the cover is knitted in wool, though the colours suggested in the pattern are sulphur-yellow, with an edging of smoke-grey rabbit wool (angora) at neck and wrist. The description says that "Shetland shawl patterns are to the fore in the jumper world just now." 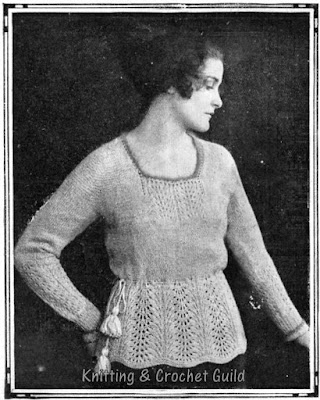 It's not easy to see in the photo, but as well as the lacy basque, there is a panel of feather-and-fan just below the square neck, and the lower parts of the sleeves are done in the same stitch - the Shetland shawl pattern mentioned in the description.  It looks very effective, though I'm not sure how easy it would be to get an even tension over both stocking stitch and lace. 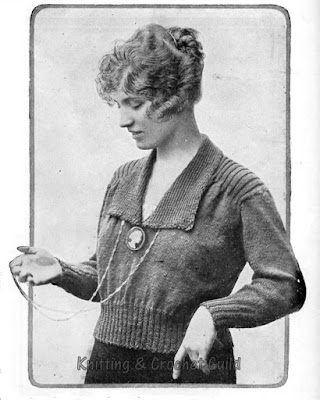 The green jumper on the cover, with a "ribbed shoulder yoke", is also knitted in wool. The overall style is very unlike the others in the magazine, and unlike our usual impression of 1920s jumpers. The collar, cuffs and bottom edge are finished with a crocheted trimming in gold thread.  Although a crochet edging might look well on the collar (which is in single rib), I think on the bottom edge and the cuffs it would interfere with the stretchiness of the rib - and gold thread on a woolly jumper seems out of place.
Of the other patterns, one I particularly noticed is partly knitted and partly crocheted, all in art. silk (artificial silk, or rayon). 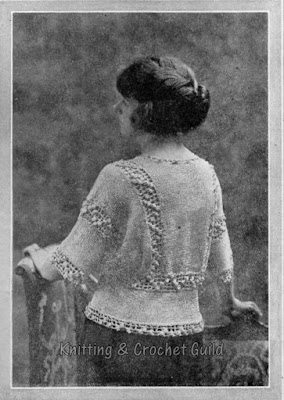 I think it's an attractive design, in a very 1920s kind of way, but I would hate to make it. Quite apart from the fact that I am not a crocheter, it requires making a lot of different pieces and sewing them together - I dislike any sewing up in my knitting, and prefer patterns that don't have any seams.   For this jumper, you have to knit seven strips of stocking stitch, shown in the diagram below. 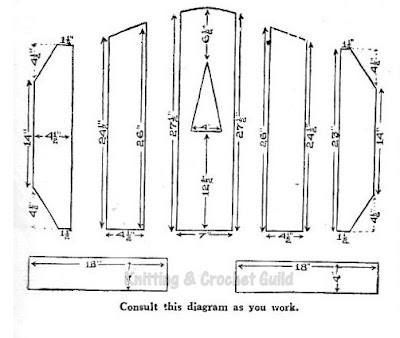 Then you make 6 strips of crochet.   (That's one fewer than the number of strips of knitting, because the crochet around the waist is only one strip, whereas for some reason the knitted basque is to be made in two pieces.)  Then they are all sewn together, and finally the crocheted strip around the bottom edge is added - mercifully this is crocheted directly onto the knitted basque rather than being made separately and then sewn on.
One reason that I took special notice of this design is that it is very like a rayon jumper in the Guild collection, below. 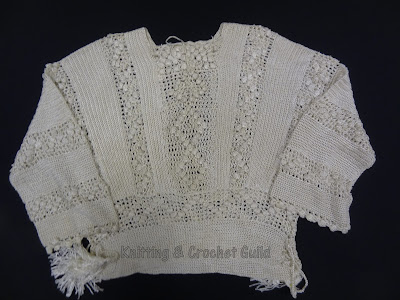 The crocheted strips with zigzags of bobbles are very similar indeed, but there are also some obvious differences.  The jumper in the collection has two extra pieces of crochet in the centre of the front and the back; an extra strip of knitting, with a narrow crochet edging, on the end of each sleeve; no crocheted edging on the bottom edge of the basque; and a drawstring waist.   Perhaps the similarity is just coincidental, and perhaps there was another pattern that is the original of the Guild jumper - there were many different needlecraft magazines being published at the time, and there might have been some overlap, deliberate or otherwise, between patterns in different publications.  But another possibility is that the person who made the jumper changed the pattern, perhaps to make it wider, with longer sleeves. And drawstring waists were so common in the 1920s that adding one is something that anyone following the pattern might have done.
The final pattern that I have picked out is also a mixture of knitting and crochet, but much simpler.  I think it's an appealing design - it wouldn't look too odd today. 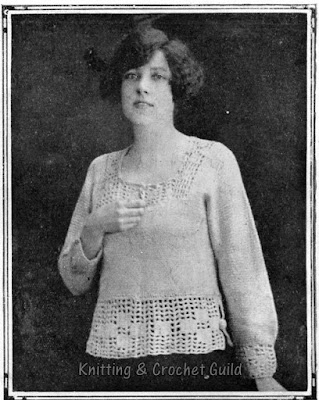 The description is: "A simple model for the jumper novice who wishes to start upon an easy but none the less effective design.  Worked in jumper yarn [i.e. wool] of pale blue or champagne, it is indeed a covetable garment for holiday, home, and office wear. Note the square neck, the long sleeve, and the side opening in the crochet basque."
For me, these are the most interesting designs in the magazine.  But members of the Guild can download the pdf of the whole magazine from the members' area of the website,  and decide for themselves.
Posted by Barbara at 11:31