During the past year, while we've been at home doing not very much, I have been adding to my small collection of knitting needle gauges.  I now have half a dozen that are in the shape of a beehive, and were made for the spinners Patons & Baldwins.  I have known for a long time that the beehive was originally the trademark of the Baldwins part of the company, and this post pulls together some of the history of the trademark.

J. & J. Baldwin was a spinning company set up in Halifax in the late 18th century - in 1785, according to their later advertising.  At some time during the 19th century, the company started to specialise in knitting wool, and began to use the name 'Beehive' for some of their wools.

The first mention of Beehive wools that I have found so far is in an ad in the Liverpool Mercury in 1879.  The ad is for a shop, Frisby, Dyke & Co., who had just had their first delivery of J. and J. Baldwin's wools, including "The REGISTERED BEEHIVE SOFT KNITTING WOOL, put up for convenience of purchase in 2 oz. hanks."   Towards the end of the 19th century, J. & J. Baldwin started to advertise directly to knitters, in various needlecraft magazines.  They began to use Beehive as the brand name for all their wools, and to use a trademark showing a beehive.

The Beehive trademark with two bees and two Bs (presumably for Baldwins and Beehive) varies a little.  In most versions, there seem to be roses on the left of the beehive, and thistles on the right. But in some versions, like the one shown below, there also seem to be shamrocks below the hive, and some rather blobby flowers to the right which might be intended to be daffodils.  The flowers in that case would represent the four countries of the United Kingdom.

In 1920, J. & J. Baldwin and Partners merged with John Paton, Son and Co. of Alloa, to form Patons & Baldwins.  (You might feel that there should be some apostrophes in there, and I'd agree with you, but the name of the company was generally written like that.)   John Paton and Son was also a long-established company, though not as old as J. & J. Baldwin.  Its trademark was a hand grasping a rose, and Patons and Baldwins continued to use both trademarks until World War 2.

The panel above, showing the Paton's rose and a simplified Baldwin's beehive, is taken from a 1930s pattern leaflet.    Both trademarks continued to be used on pattern leaflets until paper shortages during World War 2 resulted in a change of design so that leaflets could be produced in a much smaller size.

Now to needle gauges.  Most of my information on needle gauges in general comes from Sheila Williams' excellent book, The History of Knitting Pin Gauges. 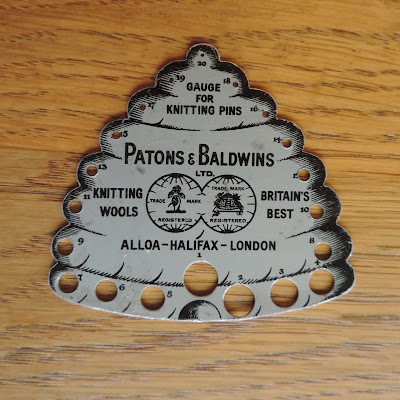 I have two metal beehive-shaped gauges, one shown above.  Sheila Williams suggests that it might have been made to celebrate the 10th anniversary of the merger of the two companies, since it shows both the Patons rose and the Baldwins beehive.  But as both trademarks were used together from 1920 until WW2, I think it could have been issued at any time during that period.

It's hard to show the detail of the design of the other metal beehive gauge in a photo, because it is shiny, so I'm showing instead the drawing in a Patons & Baldwins brochure, The Red Book, published in 1935.  According to The History of Knitting Pin Gauges, beehive needle gauges were mentioned in an edition of Woolcraft in the 1920s, but I haven't tracked that down yet. This design of gauge may have been in use for a long time in the 1920s and 1930s - it is certainly much more commonly offered on eBay than the other metal beehive gauge.

Patons & Baldwins evidently found the beehive shape appropriate for needle gauges -  perhaps inspired by the bell-shaped gauges that were very common.  But they were also adopting the beehive as the trademark for the whole company, and Beehive as a brand name for the company's wools, and for other products such as knitting needles.

The other beehive gauges in my little collection were produced after the end of World War 2.  A new Patons & Baldwins trademark began to appear in ads during 1946: it has 'P & B' within the outline of a beehive.

Here's a clearer version of the trademark, used on a placard to be displayed in a yarn shop. 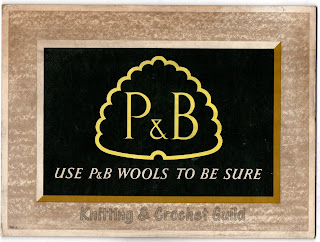 There are two different designs of needle gauge in plastic that show this trademark.  One, which I think is the earlier form, is the same shape as the pre-war metal gauge, but smaller, and measures the same range of needle sizes. 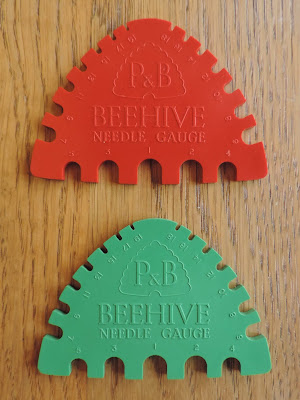 I think this gauge may date from the late 1940s, when the new trademark was first introduced.

The other plastic gauge is smaller still, and the smallest size of needle that it measures is size 14 (2mm.).  This is also the smallest size measured by modern gauges, and is the finest knitting needle size commonly sold.  I would guess that this gauge dates from the 1950s. 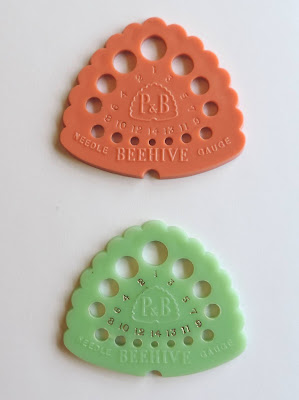 Those are the six beehive needle gauges that I have in my own collection - the two metal ones, and two each of the plastic designs.  Another object in the shape of the Patons & Baldwins beehive was introduced in the late 1940s - the Beehive wool holder. 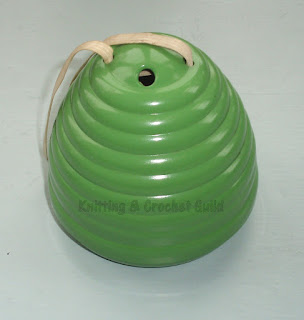 I wrote a post about the wool holder here.  The design was registered in 1948, and was probably in production for many years after that.  It has a needle gauge in the base, but I don't have one in my own collection, mainly because I'm only collecting gauges which  are principally needle gauges and not something else, like a knitting needle box. (Also, beehive wool holders are quite expensive - they are attractive objects, and evidently a lot of knitters would like to have one.)   The wool holder in the photo is in the collection of the Knitting & Crochet Guild.

In the mid 1960s,  Patons & Baldwins changed their image again, and dropped the Baldwins name from their advertising and pattern leaflets.  But the beehive continued to be used as the Patons trademark.  Below, you can see it on a pattern leaflet with a Mary Quant design, published in 1965.

Patons still uses the beehive as the company trademark today.  I think it's remarkable that the beehive symbol on the label of every ball of Patons yarn has been used in its various forms since the 19th century.  And it commemorates a company founded more than two hundred years ago.  That's a lot of history in my beehive needle gauges.