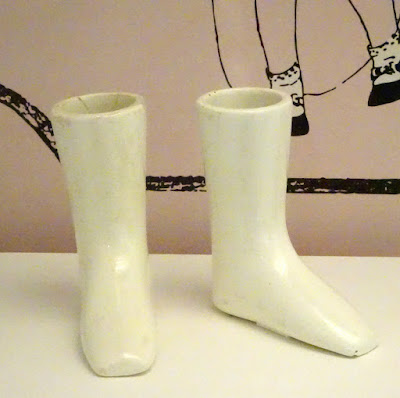 Back in February, I went to an exhibition, An English Lady's Wardrobe, at the Walker Art Gallery in Liverpool.  It showed the clothes collected by a local woman, Mrs Tinne, between about 1910 and the 1930s.  It was an astonishing collection - she bought a vast number of outfits which she never wore, sometimes the same dress in different colourways, for instance. She had six children (as well as one who died as a baby) and some of their clothes were on display too.

Sadly (from my point of view), Mrs Tinne doesn't seem to have been much interested in buying knitwear, but I found it a fascinating exhibition even so.  And one exhibit did have a knitting connection: a pair of china feet, described as 'child's sock-dryers'.  They are of glazed earthenware, made by Wedgwood, with a factory mark that dates them to some time between 1907 and 1924.

The catalogue description says 'Damp socks were drawn over them to dry out', so they were a laundry aid. Perhaps they would balance the other way up, to allow the soles of the socks to dry?  They were a bit baffling, and I had never heard of anything like them for drying socks.

But then recently I found a reference to china feet for drying socks in an 1895 article in the magazine The Young Woman.  The article, by Mrs Elliott Scrivenor, gives instructions for washing knitted wool garments


"I want to give you a few hints with regard to washing any knitted garments or stockings. First, NEVER let woollen stockings or socks be boiled.  Many persist in this, and it shrinks the wool and thickens it.  They must not be worn sufficiently soiled to require such treatment. ..... Stockings must have soap, but the soap must be made into a lather with warm water, not hot; then wash them gently in the lather, after that wash in two or three waters, the chill just taken off the water, and block them to dry.  A block should be used for everything knitted.  You can now procure china feet for small-sized socks and stockings; other blocks are cut out of box or sycamore wood to the shape and size; they are about half an inch thick, with bevelled edges; the stockings are drawn over them, and left upon them to dry, and in the open air if possible."

So there is confirmation that china feet were used for drying children's socks.  I was interested too in the mention of blocks of wood for drying larger socks and stockings.  Mrs Scrivenor goes on to talk about washing other knitted garments, and says "If you have no block, cover a board with several folds of clean linen, and pin the work out upon it, taking care not to stretch it beyond its right size."  We still talk about 'blocking' a newly-knitted garment as part of finishing it, by wetting or dampening it and laying it on flat surface, adjusting it to the right size and shape.   But if the origin of the term 'blocking' is that blocks of wood were once used, that has been forgotten, as far as I am aware.  You can now buy 'sock-blockers', which are flat sock shapes of plastic or thin plywood, but they are called sock-blockers because they are used for blocking, not because they are blocks of wood.

Mrs Scrivenor also wrote a 'Collection of Knitting & Crochet Receipts' for Patons, then John Paton, Son & Co. Ltd. of Alloa (Scotland), already one of the largest knitting wool spinners in the country.  It was a comprehensive collection of patterns in a book of more than 280 pages, about 9½ by 7¼ inches (24.5cm by 18cm).  The 4th edition, which is in the Knitting & Crochet Guild collection, is dated 1909.  It is well illustrated with photographs, and looking at some of the children's sock patterns, I suspect that Mrs Scrivenor might have used Wedgwood china feet to pose them on, judging by the squared-off toes.


But I wonder how practical they were for laundry. How many pairs would you need for each child?  Perhaps not many, even in a wealthy household - Mrs Scrivenor's advice that you shouldn't wear socks until they need boiling suggests that most people didn't change their socks very often. (Poor children probably didn't wear socks at all, and the poorest would have gone barefoot, but Mrs Scrivenor's readers would certainly have been able to provide their children with dainty socks and bootikins like the one illustrated.)  The china feet would take up quite a lot of room, especially in use when they would have had to be in an airy place to allow the socks to dry.  And they are breakable. A full list of the items in Mrs Tinne's Collection is given in the exhibition catalogue, and there is only one pair of china feet.  Perhaps the rest broke, or a single pair was tried as an experiment and not judged worthwhile?  I am not really surprised that they don't seem to have been in common use.
Posted by Barbara at 11:16