Thursday is usually a knitting day for me.  In the morning, I meet a group of friends to knit in Cafe Society in Huddersfield.  In the evening I meet another group of knitting friends, except that on the 3rd Thursday of the month it is the Huddersfield Knitting & Crochet Guild branch meeting instead, at the Town Hall - and this week was the 3rd Thursday.  We couldn't physically meet for either of those events, but we did the best with technology and had virtual meetings.

Instead of going to Cafe Society, we all sat at home, drinking our own coffee, knitting and chatting via Messenger.  It worked surprisingly well, and hopefully next week we shall all have Skype working and we might be able to see each other too.  Here's what I was knitting this week. 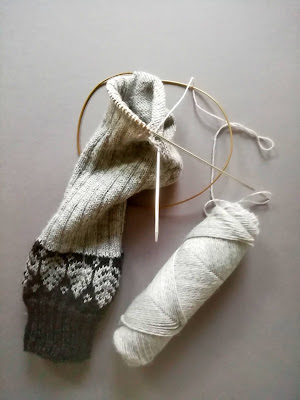 In the afternoon, between knitting groups, John and I went for a walk around Blackmoorfoot Reservoir, on the edge of Huddersfield.  It was a beautiful afternoon, quiet and peaceful.  The bird you might just see in the photo is a grebe - it seemed to be successfully catching something (presumably a small fish) every time it dived. 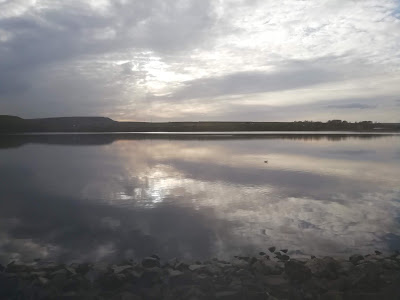 For the branch meeting in the evening, we had planned to have a talk from Marie Wright on the March sisters, from Little Women, and another 19th century family, the Ryder sisters. Instead of the scheduled meeting in the Town Hall, Marie and her sister Ann Kingstone live-streamed the talk from Ann's house via the Guild Facebook group.

Marie talked about what the March sisters knitted in the Louisa M. Alcott books, and also the knitwear in the recent film, especially what the four sisters are wearing in this still: 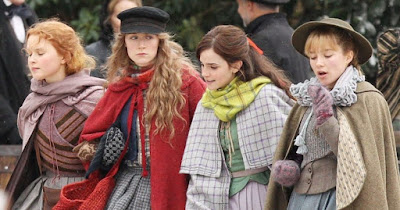 In the world of the book, anything knitted that any of them wore would have been made in the family.  Beth is wearing a Sontag, a shawl worn crossed over at the front and tied at the back, all four of them are wearing mittens, including some fancy colour-work on Jo's,  and Amy has a ruffled collar, apparently on another wrap-around shawl.

The Ryder sisters, on the other hand, were a real family of four sisters (and two brothers), all born in Ecclesfield in South Yorkshire.  Marie pointed out some parallels between the two families.  After their father died, the family moved to Richmond in North Yorkshire. Two of the sisters, Henrietta and Elizabeth, published knitting patterns and books, from the 1860s to about 1900 - Marie and Ann have acquired some of the Ryder sisters' works, and Ann showed us a pair of socks that she has knitted, with a colour-work band around the top in a clover leaf design, inspired by a stocking-top pattern of Henrietta Ryder's. (You can see the socks on Ann's blog.)  It was a fascinating talk, and I was very grateful to Ann and Marie for setting up live streaming, as well as preparing the talk.

In spite of having to avoid everyone except the two of us, Thursday was a good day for John and me.  And I did go to two knitting groups on Thursday after all - it wasn't as good as meeting in person, but far better than not meeting at all.  No doubt this sort of work-around will become normal in the weeks ahead.