Jumpers and Sports Wear in 1931 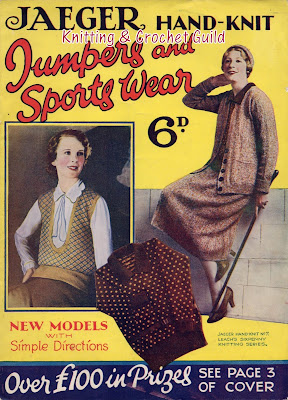 Leach's Sixpenny Knitting Series was published from 1920 to 1935, according to the British Library catalogue - I wrote about one of the series in my last post.  We have a few of the issues in the Knitting & Crochet Guild collection, including the 'Jaeger Hand Knit Jumpers and Sports Wear' shown above.  It is marked as one of Leach's Sixpenny Knitting Series on the cover, though without a number, and also as 'Jaeger Hand-Knit No. 7' - there was evidently an arrangement that Leach's would publish Jaeger pattern booklets in this way.  There is no date explicitly given in the booklet, but a Jaeger knitting competition is advertised with a closing date in January 1932, so it must have been published in 1931.

The booklet has several patterns for women, all very smart as you would expect from Jaeger.  There is the 'Attractive Sports Three-piece with matching beret', illustrated on the cover - a cardigan and skirt in a flecked wool to imitate tweed, and a very nice collared jumper in dark brown with orange spots. Also shown on the cover is a 'smart over-blouse', in camel colour with blue diamonds.

Of the other patterns, the most interesting technically is a Fair Isle jumper.  The pattern is headed '"Fair Isle" Patterns are Still in Favour' - the fashion for Fair Isle sports jumpers had started in the early 1920s, so perhaps it was noteworthy that they were still in vogue in 1931. 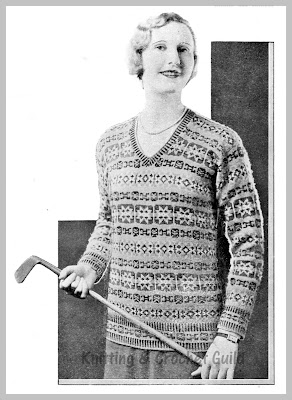 I was surprised to see that the knitter is advised to knit the body, up to the armholes, on a circular needle, 'which makes the knitting very simple'.  I knew that circular needles were available in the 1920s, but had not previously seen them specified in a pattern. Here's an ad from 1923 for Flexiknit needles: 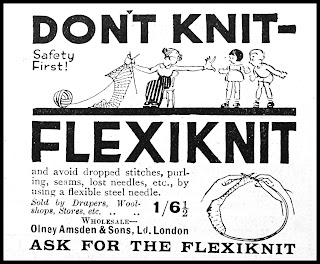 The sleeves of the Fair Isle jumper are also to be knitted in the round, from the cuff up, but on double pointed needles, I think because small diameter circulars were not available, and the cables were wire, so not flexible enough for magic loop or any similar technique.

Another novel feature of the Fair Isle jumper is that there is a band of stranded knitting sandwiched between two bands of corrugated rib in the cuffs and the lower edge.  I don't think I have ever seen that before - an interesting idea.  The suggested colours of the jumper are camel for the background, with orange, dark green, dark red, navy blue, Saxe blue, peach, brown and green.

Another garment in the booklet looks surprisingly modern - 'A Jumper-Coat in Two Colours - a fastens smartly with a zip fastener as many of the newest models do'. 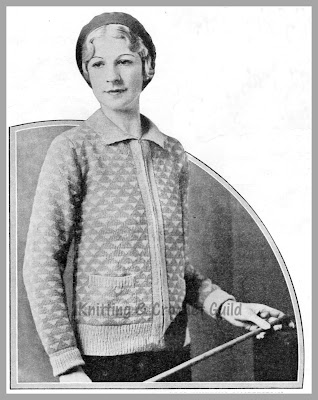 According to Wikipedia, although zips had been invented in the 19th century, they only began to be used on clothes around 1925, initially on leather jackets, so this knitted jumper-coat would have looked very new.

Another outfit with a matching beret has an unusual side fastening to the jumper, and the skirt ribs imitate pleating.  (I like her fancy shoes, too.)

And 'note the uncommon trimming on the beret': 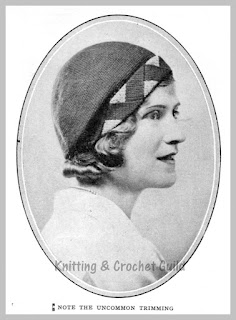 There are a few other patterns in the booklet, too, for a V-neck jumper in cashmere, and a couple of cardigans - all plain and simple, but smart.

Finally, I mentioned in an earlier post that I had found a pair of Jaeger knitting needles, and that I thought that they were made around 1930 because of the lettering.  Here's the evidence, in an ad for Jaeger Floss in this booklet: 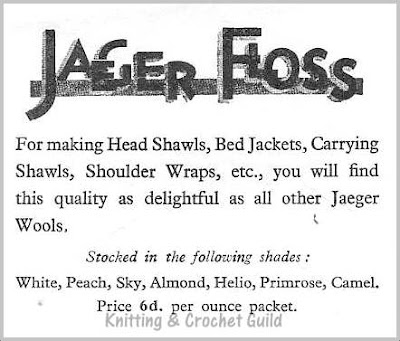 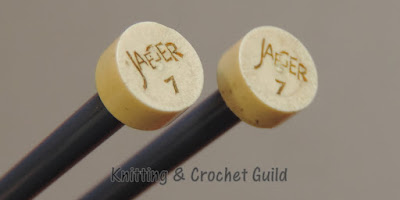 Same lettering.  QED.   I don't think I have seen that logo anywhere else. Here's a logo used elsewhere in the booklet: 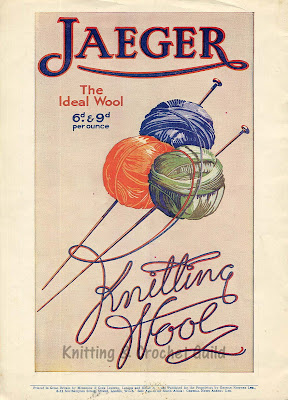 For anyone who likes 1930s knitwear, or would like to look at the patterns in detail, a scanned copy of  'Jaeger Hand Knit Jumpers and Sports Wear' is on the Knitting & Crochet Guild website for Guild members to download.