I belong to two book groups, and for several years now I have been making Christmas cards for the members of  one of them, showing the books we have read during the year.  I give them out at the book group Christmas dinner in December.  Here's the 2019 card: 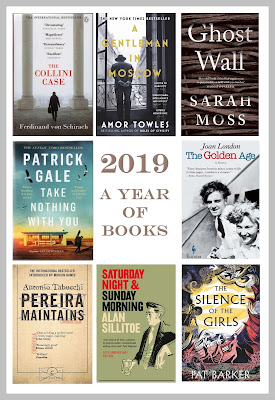 
As usual, there were several books that I'm sure I would never have read (never even heard of, probably) without the book group: The Collini Case, A Gentleman in Moscow, Pereira Maintains and The Golden Age.  The Collini Case deals with the long shadow of the Nazi era in Germany -  Ferdinand von Schirach's grandfather was the head of the Hitler Youth, and prosecuted for war crimes at Nuremberg. A Gentleman in Moscow is the story of a wealthy aristocrat who is confined to house arrest in a Moscow hotel after the Russian Revolution, and recounts how he survives and makes a life in straitened circumstances.  (It's going to be turned into a TV series with Kenneth Branagh, I read.)  Pereira Maintains is set in Lisbon in 1938, under the fascist dictatorship of Salazar - Pereira is a journalist writing about cultural topics and trying to stay out of politics, until finally he is forced to rebel.  The Golden Age is named after a children's hospital in Australia in the 1950s, where polio cases are sent for rehabilitation.  The main character and his parents have arrived in Australia as survivors of the Holocaust, and the novel also deals with the parents adjusting to their new lives.  I enjoyed all of those, and I think the rest of the group did, too.  The Silence of the Girls was my choice, a retelling of the Iliad from the point of view of one of the women who is awarded to Achilles as a prize, after her home is destroyed by the Greeks, and all her menfolk slaughtered. A really good book, though in our discussion we got into an argument about whether (in the world of the book) the Greek gods actually exist and do things or whether the apparently supernatural events are only supernatural to Briseis, because she believes in the gods.  (It's a work of fiction, so the gods are allowed to exist in the book, in my view, and can preserve corpses from decomposition, or whatever else they want to do.)

I think I read Saturday Night & Sunday Morning a long time ago, and I'm sure I saw the film, but re-reading it now, I didn't like it.  I couldn't understand the main character - he seems to be unpleasant to people for no good reason, and then suddenly decides to get married.  But other members of the group did enjoy it, so it's just me.   I had read and enjoyed Patrick Gale's book A Place called Winter, inspired by his own great-grandfather's life, and enjoyed Take Nothing With You, too.  It's based partly on Patrick Gale's own experiences of learning to play the cello (not something I knew anything about).  The title is from the protagonist's treatment for thyroid cancer, being isolated in a lead-lined room having taken a radioactive iodine pill - he is advised not to take anything he values in with him, because it will become radioactive.  My husband has had the same treatment - reading a fictionalised account of it was a slightly odd experience.

This year I decided to make cards for the members of my other book group, too.  (We don't have a book group Christmas dinner, so hasn't been the same prompt to distribute cards, so I  have made them New year cards.)  I used the same format - both groups read eight books in 2019. 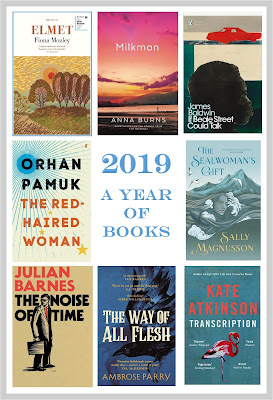 In the other group, we avoid reading books that any of us ahs read before (unless we decide to revisit a book that most of us read a long time ago, like Cold Comfort Farm or Saturday Night and Sunday Morning), but this group doesn't have that rule, so I had already read The Sealwoman's Gift - in fact it appeared on last year's Christmas card for the first group.  It's a fascinating story, based on real historical events.  Some of the other books by well-known authors that had received good reviews were a bit disappointing.  But Milkman (that  won the Man Booker prize in 2018) was worth reading, and I might not have chosen to tackle it but for the book group.   The Way of All Flesh (Ambrose Parry) is not in the same league, but we enjoyed it.  It's a detective story set in 19th century Edinburgh.  "Ambrose Parry" is actually two people, a novelist who has written many other books and his wife who is an anaesthetist.  Several of the characters in The Way of All Flesh did actually exist, including James Simpson, an Edinburgh obstetrician who introduced chloroform as an anaesthetic, so as well as being a good read, the book is very informative about the early development of anaesthesia.  As with other well-written historical novels, you feel that you are being educated as well as entertained.
Posted by Barbara at 17:55