Last year, I posted a rhyme, Anna's Adventure, published by Patons & Baldwins about 1946, to advise knitters on how to wash wool.   Last week, I found another P&B rhyme in the Knitting & Crochet Guild collection.  "Bridget's Blunder" is about the dangers of using allegedly shrink-proof wool, other than P&B's own 'Patonised' wool.  Here it is, with a transcription below: 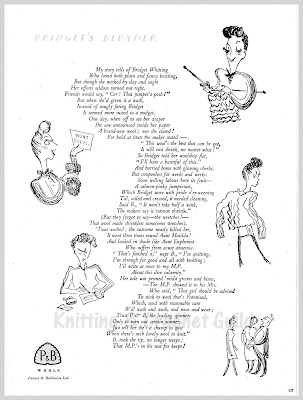 My story tells of Bridget Whitting
Who loved both plain and fancy knitting,
But though she worked by day and night
Her efforts seldom turned out right.
Friends would say, "Cor! That jumper's posh!"
But when she'd given it a wash,
Instead of snugly fitting Bridget
It seemed more suited to a midget.
One day, when off to see her draper
She saw announced inside her paper
A brand-new wool; was she elated!
For bold as brass the maker stated
"This wool's the best that can be got,
It will not shrink, no matter what!"
So Bridget told her woolshop flat,
"I'll have a basinful of that."
And hurried home with glowing cheeks,
But couponless for weeks and weeks.
Soon willing labour bore its fruit—A salmon pinky jumpersuit,
Which Bridget wore with pride o'er-weening
Till, soiled and creased, it needed cleaning.
Said B., "It won't take half a wink,
The makers say it cannot shrink."
(But they forgot to say—the wretches!—
That wool made shrinkless sometimes stretches).
'Twas washed; the outcome nearly killed her,
It went three times round Aunt Matilda!
And looked in shade like Aunt Euphemia
Who suffers from acute anaemia.
"That's finished it," wept B., "I'm quitting,
I'm through for good and all with knitting;
I'll write at once to my M.P.
About this dire calamity."
Her tale was penned 'midst groans and hisses,
—The M.P. showed it to his Mrs.
Who said, "That girl should be advised
To stick to wool that's Patonised,
Which, used with reasonable care
Will wash and wash, and wear and wear;
Trust P & B, the leading spinners
Only to turn out certain winners.
Just tell her she's a chump to quit
When there's such lovely wool to knit."
B. took the tip, no longer weeps;
That M.P.'s in his seat for keeps!

The poem appeared in The Nursery World 1st Knitting Book, published I think in 1946, like "Anna's Adventure".  Even after the war was over, clothes rationing in Britain continued until 1949, so the reference to being "couponless for weeks and weeks" after buying enough wool for a jumpersuit is no exaggeration - in fact, I doubt if anyone could afford the coupons for that much wool more than once a year, and even then it would be your main clothes purchase.

I suspect that the shrinkproof wool that stretched in the first wash might have been intended to refer to Emu wool.  Emu started to appear in ads from 1943 (possibly earlier) with the slogan "Knit with Emu and stop thinking about shrinking".  One ad claimed: Emu is the result of scientific research into wool shrinkage.  It is made permanently unshrinkable and easy washing by a secret process called "emunising". I assumed that emunising and Patonising were more or less the same process, but perhaps not.   And in any case, if Patons & Baldwins were indeed referring to Emu wools in "Bridget's Blunder", it didn't do the brand much harm - Emu Wools were very successful, and remained so until the 1980s.  The company was eventually taken over by Thomas B Ramsden (makers of Wendy, Robin and Twilleys yarns), who relaunched Emu Superwash Wool in 2005 (though it seems to have been since discontinued).  So shrinkproof Emu wool evidently had a long and distinguished career. 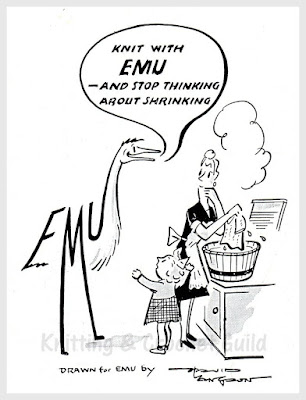