A couple of weeks ago, a local member of the Knitting & Crochet Guild gave me three bags full of patterns for the Guild collection, including one issued by Vanity Knitting Wools:


It is in very poor condition, creased, torn, mended with sellotape that is now yellow and brittle - I have cleaned up the scan quite a lot.  But I noticed it immediately because I had never seen a Vanity pattern before, though I had just about heard of the brand.  It was advertised in magazines like Vogue Knitting Book in the late 1940s and early 1950s.  And it is a charming outfit for a little girl, knitted in 3-ply wool, in grey with green, rust and yellow.

Leaflet 3007 was featured in an ad in Vogue Knitting in 1948, which gives an address for the manufacturers: J. W. Bastard Ltd., Frog Island Mills, Leicester. 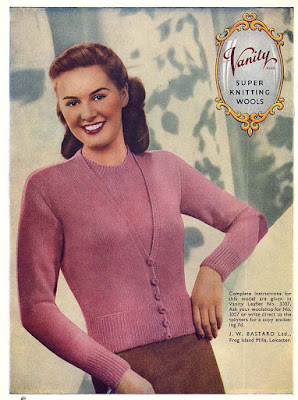 Later ads I have seen, from 1951, show leaflets 3005 and 3011, which suggests a very slow rate of production of pattern leaflets, and also that number 3001 might have been the first of perhaps fewer than 20.

A bit of research into the company, which was actually J. & W. Bastard, led to the entry in Grace's Guide.  The entry shows an ad from 1921, describing the company as "spinners of  every description of yarn for manufacture of hosiery, underwear or knit goods" - but not hand knitting yarns.  It seems that they supplied yarn to other companies, especially the hosiery manufacturers in Leicester, I imagine.

The late 1940s must have seemed a propitious time to branch out into supplying knitting wool - clothes rationing was coming to an end after 8 years. The country was full of experienced knitters who had been managing with very little new wool, making do by re-knitting unravelled old jumpers.  They must have been desperately keen to be able to buy wool in larger quantities, in the colours they wanted - an opportunity for companies like J. & W. Bastard.  Other companies, too, advertised in knitting magazines for the first time - the Jester Company, for instance, also in Leicester, published knitting patterns and advertised in Vogue Knitting from about 1947.  But Jester and Vanity did not continue as knitting wool brands for very long - they both seem to have stopped advertising in the early 1950s.  J. & W. Bastard continued in business until at least the early 1960s, supplying yarn to other companies for machine knitting.  But I imagine that breaking into the hand knitting market, in competition with long-established names like Patons & Baldwins, Sirdar and Wendy, was just too difficult.

Although the Vanity brand didn't last long, I'm very pleased to have seen a Vanity pattern leaflet.
Posted by Barbara at 18:30