Last Friday was Granny Square Day 2019 on Instagram. The idea was to make a virtual blanket, using Instagram's grid format to combine photos of granny squares posted by individual crocheters.  I'm not a crocheter, so I didn't take part, but it did remind me of a pattern in the Knitting & Crochet Guild collection which is an early example of granny squares being used in a garment. (Not under that name of course -  "granny squares" is much more recent term.)

The leaflet is from the early 1920s, when loose, rather shapeless jumpers were in fashion. It's partly knitted and partly crocheted.  The main part is knitted (in garter stitch) in a T shape, the front, back and sleeves all in one piece.  Fourteen crochet squares are needed, a panel of four squares at the bottom of the front, the same at the back, one square set diagonally at the bottom of each side, and two squares on each sleeve.  The leaflet also has instructions for making crochet balls stuffed with cotton wool - three are sewn to the points of the squares at each side of the jumper, and two more are attached to a crochet chain that is threaded through around the neckline.  So although the basic shape is simple, it's a complicated make.

Esplen-d'or knitting yarn was art silk, or rayon, very popular in the 1920s.  The ads claim that it was "The most Brilliant Article procurable for hand-knitted Jumpers, Coats, Scarves, etc." (But then they would, wouldn't they.)

I think the elaborate design is quite typical of early 1920s jumpers in art silk - their basic shape is a simple T, with side and sleeve seams, but they are often quite complicated overall, pieced together from bits of knitting and bits of crochet, and trimmed with balls, tassels, belts and cords.

Esplen-d'or knitting yarn was advertised in needlecraft magazines from about 1923, and one particular advantage claimed is that it "is now made up in 4-oz. Balls - wound in a special manner which prevents the threads from slipping."  Rayon is a very smooth, shiny yarn - and very, very slippery. It was usually sold in hanks, but if you wound it from the hank into a ball in the usual way, it would soon collapse and tangle.  Instead, knitters and crocheters wound the yarn onto special cross-shaped winders, made of plywood (or sometimes just cardboard).  I've written before about these yarn winders - here are two of them from the Knitting & Crochet Guild collection. 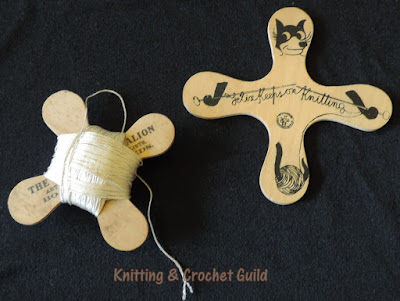 If Esplen-d'or really was wound into balls that would be stable from start to finish, that would be a huge help to users.  I assume that each wrap round the ball somehow fixed the previous wraps in place, though I can't really see how.

The ad above gives the price of Esplen-d'or  - 3/3 for 4 ounces (100g.) in plain colours, more for "shaded, mingled and oriental colours".  3/3 means 3 shillings and 3 pence, and is equivalent to about £9.56 now, using the Bank of England's historic inflation calculator.  Other brands of art silk advertised at the same time were, surprisingly, more expensive, even though they were sold in hanks and not ready-wound (and even though Esplen-d'or was the "most brilliant article procurable").  The prices of knitting wools seem to have been much lower.  Art silk appears to have been a luxury product, though presumably cheaper than real silk.

There is little information in the ads or on the leaflets about the company that made Esplen-d'or, except for an address at 84 Queen Victoria Street, London E.C.4.  The ads for Esplen-d'or products continued into the 1940s, although the later ads that I have seen are for embroidery silks, not knitting yarn.  Art silk jumpers were mainly a 1920s fashion, and perhaps the company was thereafter reduced to producing only embroidery silks, and died during the war, though I really don't know.

There are very few Esplen-d'or pattern leaflets in the Guild collection.  Here is one of the others, for a crocheted tam, in stripes of two colours, with a tassel.  The model on this leaflet seems to have had her hair bobbed, so perhaps this is a later leaflet than the jumper pattern. 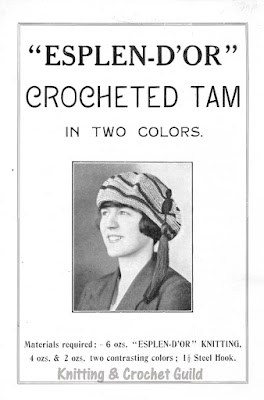 I think it looks rather fetching, though I think having a tassel hanging on your shoulder would get seriously annoying very quickly.  And given the slipperiness of art silk, not to mention the weight of the tassel hanging off the side, I suspect this would need at least a hatpin or two to keep it on.  It's not a hat for cold windy weather.