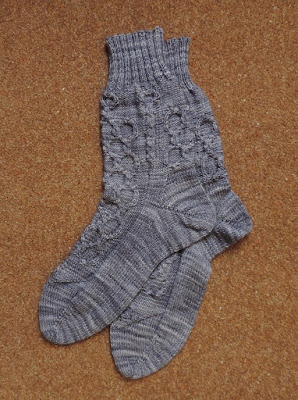 I have finished my Rosedale socks  - in fact I finished them in time for Christmas.  The pattern is from Ann Kingstone's Cable Knits book, the yarn is Countess Ablaze sock wool in the colourway Grey Skies in Manchester.

I made a few changes to Ann's pattern.  I used the heel from her On the Other Foot socks, because those socks have a gusset and fit me very well.  I also replaced the picot cast-off edge with a ribbed cuff because I prefer it.  And the pattern has a complicated rose-like cable at either side of the ankle, just below the picot edge - I left those out, and substituted a simple circle.  Another change was unintentional - the cables are supposed to be sometimes right over left and sometimes left over right, but I didn't notice and did them all the same way.  By the time I realised the mistake I had gone too far to want to go back and correct it, and I think it's fine to have them all going the same way.

The cable design is perhaps not as visible as it might be - it would show up better perhaps in a lighter solid colour.  But the cables are perfectly clear to me when I'm wearing the socks and looking at my feet, which is all that's necessary.

I made another minor mistake in the second sock, which I'm not going to tell you about.  It wouldn't have happened if I had been knitting both socks at the same time (or else I would have made the same mistake in both socks).  So my New Year knitting resolution is to try knitting two socks at the same time - I have already started a pair, in fact.  I could have been more ambitious, e.g. resolving to finish all my unfinished projects before starting another, but let's be realistic.

So I have a new addition to my growing wardrobe of warm, well-fitting hand-knitted socks.  As I said, I've started another pair already, but those will be for my sister.
Posted by Barbara at 21:02