A friend has been collecting knitting needle gauges recently.  She found that she had two examples of Chambers' Bell Gauge, so has generously given one to the Knitting & Crochet Guild collection.  Here it is: 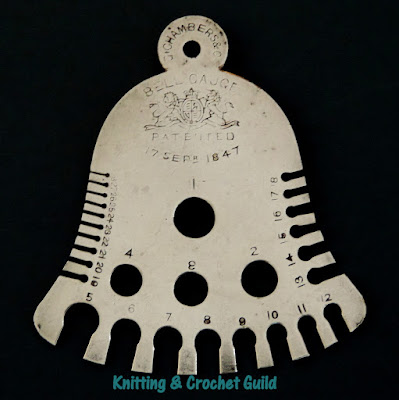 The gauge has the Royal arms, "G. CHAMBERS & CO", "BELL GAUGE" and "PATENTED 17 SEPR 1847".  Sheila Williams, in her book The History of Knitting Pin Gauges, illustrates this gauge and a version that gives the address of George Chambers' business:  Priory Needle Mills, Studley, Warwickshire.

George Chambers was the first to make needle gauges in a bell shape, which became almost the standard for needle gauges for a very long time.  We have around twenty, of different makes, in the Guild collection, including these: 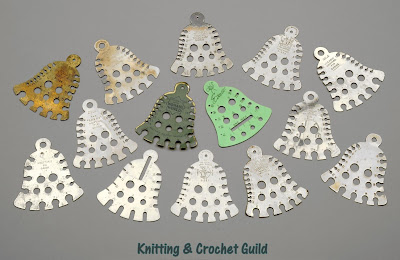 The bright green Emu gauge in the centre is from the late 1940s, so that bell gauges were produced for 100 years, following the 1847 patent.

The main difference between the Chambers gauge and later bell gauges is that it measured much finer needles - the smallest size is a 28.  On the old British scale, the larger the number, the finer the needle.  I can't find a needle size conversion chart that goes below a 14 (2 mm.), but the needle sizes were the same as the old British Standard Wire Gauge, and conversion tables for wire give size 28 as 0.3759mm.   (At the opposite end of the scale, the largest size on the Chambers gauge is size 1, roughly equivalent to 7.5mm, so quite chunky.)

I cannot imagine knitting with anything finer than 1mm. - less than 0.5mm. seems impossible.  What thread could you knit with such a fine needle?  We do have very fine crochet hooks in the Guild collection, where the hook part at the end is barely visible, but I don't know whether the Chambers' Bell Gauge could have been used to measure crochet hooks.  (The sizing of crochet hooks in the 19th century is in any case very mysterious, as far as I'm concerned.)

Sheila Williams says in her book that George Chambers died in 1865 - his company was in financial difficulties before that, and seems to have disappeared shortly after his death.  Well before the end of the 19th century, other companies were making bell-shaped needle gauges. One that became very common was Walker's Bell Gauge, with sizes from 1 to 24 (0.56mm.) - there are still many surviving, and knitting patterns around the end of the 19th century often specified this gauge to measure needle size.

But evidently for some people, Chambers' Bell Gauge remained the standard long after George Chambers' death.  'Muriel', who wrote a column called 'Feminine Fancies, Foibles and Fashions' in the Sheffield Weekly Telegraph in the 1890s and 1900s, sometimes gave a short knitting or crochet pattern and specified that the size of knitting needles or crochet hooks should be measured using Chambers' gauge.  Here is one of her offerings, from December 1895, appropriate for the approaching cold weather:


COMFORTS FOR YOUNG AND OLD ALIKE.
A most useful gift at this time of year is a pair of night socks, and the directions that follow are so simple that any child, boy or girl, can carry them out, and produce a most acceptable offering to those they love, for without distinction of age, or sex, night socks add much to the comfort of all who suffer from cold feet. Tiny children's comfort can be provided by diminishing the number of the stitches. The size quoted is a medium size, and the colours named can be substituted by any others that may be preferred. Take steel pins No. 13, Chambers' bell gauge. Two needles only required. 1 oz. red, single Berlin wool, and 2 oz. black ditto, or any good contrasting colours. Cast on 72 stitches; knit 2 plain and 2 purl alternately for about two inches, then commence with red wool, and knit about an inch and three-quarters; then go on with the black wool for three inches. After that knit with red for another inch and three-quarters; then use black wool, knit two inches. Cast off, fold the knitting together, and join the ends.  Run a narrow piece of elastic inside, about an inch from the top of the sock: finally ornament with a bow of ribbon. When the foot is put in it the sock shapes itself.  Among the sick and aged poor gifts of these inexpensive sleeping socks would find ready and grateful acceptance.

[Muriel evidently didn't have a great repertoire of knitting patterns, for she repeated this one exactly in 1902, and again in 1912, when she called them American overshoes - "a great comfort to travellers by road or rail, and they serve as sleeping socks also."  At the end of the pattern, she says " When finished, this sock looks exactly like a small bag, and as unlike a foot covering as possible, but on inserting that member the bag resolves itself as if by magic into a handsome and shapable shoe; it will keep the feet warm in bed and on the carpet, and drawn over the shoes in car or tram will be found most comfortable.  I have made many pairs of shoes in different colours for friends and for bazaars, where they sell very well.  The shoes contract or expand according to the size of the feet they cover."  She's not convincing me, I'm afraid.]