I have just been to Birmingham with my colleague Angharad - we did a trunk show and workshop on Arans yesterday for the Birmingham branch of the Knitting & Crochet Guild.  That is, I did the trunk show in the morning, and Angharad did a workshop in the afternoon.  We had two suitcases full of Arans - they are of course very bulky and heavy.  (Fortunately for us, we didn't have to transport them ourselves on the train - they were taken to Birmingham by car a few weeks ago and they are being brought back this week.)  I've given talks on Aran sweaters a few times, based on those in the Guild collection, and I showed some of the same things yesterday, including a replica of the sweater illustrated in Mary Thomas's Book of Knitting Patterns, published in 1943, that I showed here.  We had also chosen the Aran sweater in 4-ply (fingering) wool from a 1959 Woman's Weekly magazine (see here for more details): 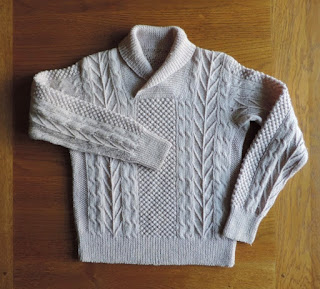 and my own Susan Duckworth Aran from 1973, as well as more conventional Aran knits.

The collection has some distinctly unconventional Arans from the 1980s, using more or less standard Aran stitch patterns, but not knitted in wool.  One we showed yesterday is in purple chenille, following the Sirdar pattern below (cropped version):

Another is in pale blue cotton:

We even have a batwing Aran sweater in a cream yarn with lurex, though in that case we don't have the pattern: 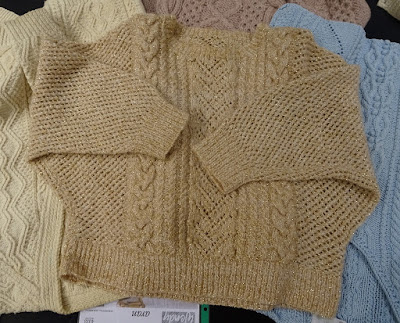 Here's a detail to show the gold sparkly bits: 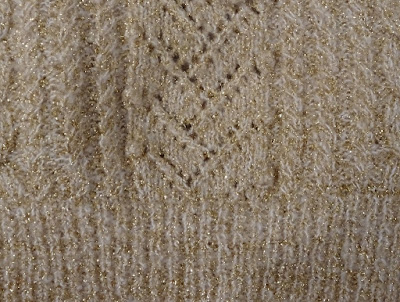 If you recognise the pattern, please let me know.  Did the pattern specify lurex yarn, I wonder, or was that the knitter's choice.  And why not?  Maybe my life too would be richer for a batwing lurex Aran sweater.

At Angharad's workshop in the afternoon, we were given Aran weight yarn in cotton, to knit a wash-cloth.  We each chose stitches from the Arans in the trunk show.  I chose mine mainly from a very fine 1950s Aran: 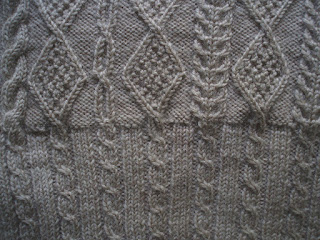 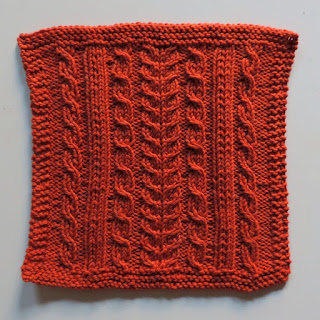 It was a very successful workshop - devising your own pattern from a garment makes you examine it much more closely than you would do otherwise.

We had travelled to Birmingham on Friday, and as an extra, that evening our friend Janet took us to a Rowan Ruby Anniversary event, put on by the Stitch Solihull yarn shop.  The Birmingham branch had treated us to the tickets, and it was a lot of fun.

There was a display of current and vintage Rowan designs, as well as the current Rowan yarns and book to browse.   The Soumak wrap below by Lisa Richardson is both past and current: it was first published in 2013, but is also in Rowan's new 40 years book.

There were of course several designs by Kaffe Fassett: the China Clouds jacket is from Rowan Magazine 28 (2000) and Summer Star from Magazine 25 (1999).

We were encouraged to wear a Rowan knit for the evening (in exchange for free entry in a raffle).  I wore the Gilda sweater that I made in 2009, in Rowan Wool Cotton - still a favourite of mine.   It was fascinating to see what other people were wearing - including a huge 1980s intarsia sweater.

There was a fashion show, too, presented by Anna of Stitch Solihull - here she is modelling a jacket with 'ROWAN YARNS' knitted into it. 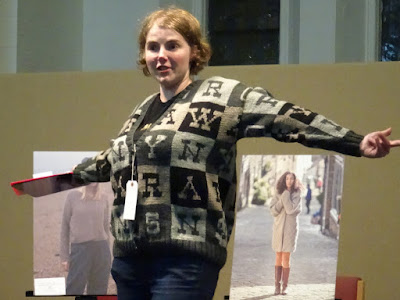 It was a very good evening.  The shop provided drinks and a buffet with a 1970s theme (for the 40th anniversary) - including pineapple chunks and cubes of Cheddar cheese on cocktail sticks, and of course Black Forest gateau.  Looking through the Rowan books, I found at least two designs that I really want to knit.  And Angharad won the first prize in the raffle.
Posted by Barbara at 21:58