Yesterday we had the September meeting of the local Knitting & Crochet Guild branch, and I gave a talk on 'Ingenious Inventions' - innovations in knitting and crochet that were patented.  I took items from the Guild collection to illustrate the talk, mostly tools and gadgets - knitting needles (including my favourite Double Century brand), crochet hooks, stitch holders, and row counters.  But also a carton for a ball of knitting yarn, and even a couple of knitting patterns.

While looking for items to include in the talk,  I found a few things in the collection that I hadn't seen before, including this row counter: 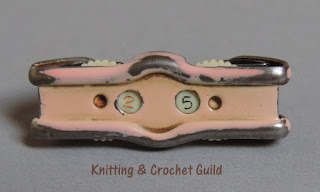 I didn't include it in the talk because it is very small  (less than 3.5cm. long) and is badly worn - the original pink paint has worn away to the bare metal in places.

The photo below shows what the back looks like.  It's designed to fit on a knitting needle:  the needle goes through the holes at either end and then under the two curled strips of metal, which hold it tightly in place.  (I think - I haven't tried it, in case it's not very robust.) 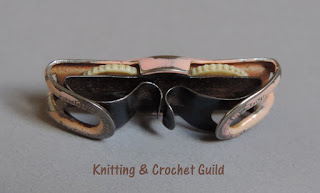 The design of this counter was patented - it isn't marked with the patent number, but I recognised it from the drawing in a patent I had already seen. (That's pretty nerdy, I have to admit.)  Patent 533615 was granted in 1941, to Reginald Langbart and Isabel Kreizer, both with addresses in north London.  They had previously been granted two other patents for row counters.  Patent 520604 had only been granted the previous year, and the patent application for the new device says that it was intended as a simplification and improvement of that (though it looks completely different). 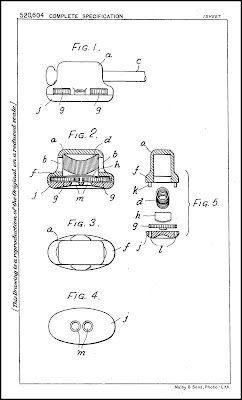 I imagine that if the inventors felt that the previous device needed improvement, it was never manufactured, but the counter in patent 533615 clearly was.  1941 was probably not a good time to start making an inessential metal gadget, so perhaps they were first produced after the war.  There is no maker's name marked, though it is stamped with 'MADE IN GREAT BRITAIN' and '"BIJOU" KNITTING REGISTER'.

Reginald Langbart and Isabel Kreizer had previously been granted another patent for a row counter, in 1935, which ultimately proved much more successful than the "Bijou" Knitting Register.   The original patent was granted in 1935: here's the drawing from the application. 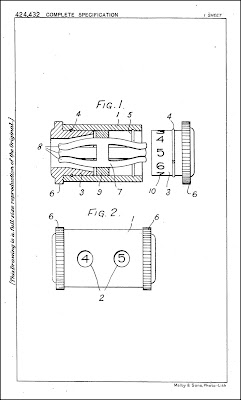 We have several examples of these cylindrical row counters in the Guild collection, including the three here: 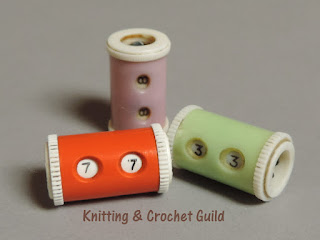 Reginald Langbart (without Isabel Kreizer) patented an improved version in 1958,  and further improvements were made, up to at least 1984.  A variant has an embedded tape measure, and the later versions have polygonal ends so that they don't roll.  And you can still buy row counters that are recognisably descended from the original 1935 device.  Counters of this type were made for a long time under the name Ro-tally - here's an ad from 1950. 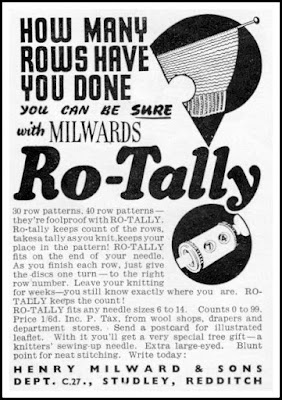 Given that the 1935 patent and its later developments were so successful, it seems odd that Langbart and Kreizer went on to invent the "Bijou" counter.  But perhaps manufacturers did not adopt the Ro-tally type at first.  It may be that it only became successful after the war, when new plastics became available - while the "Bijou" Knitting Register seems to have gone out of use very quickly, leaving few survivors.