A week ago, I went to the memorial service for Cath Harris, a friend whom I knew from the knitting & crochet groups we went to.  Knitting, crochet, embroidery, and other textile crafts were an important part of her life - as you can see from the knitted shawl she is wearing in her photo. 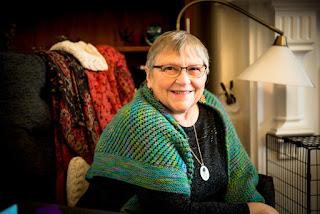 But as well as that, she was a very active member of the Labour Party, and was elected to Kirklees Council.  An appreciation of her work as a councillor appeared in the local paper here.  She had a special interest on the council in children and young people and became deputy leader, until she had to resign due to ill health.  Until she retired, she was a teacher, specialising in children with special needs, and after she retired she continued to be active in schools as a school governor and with her great friend Pauline was a volunteer teaching children to knit.  Barry Sheerman, the local M.P., spoke at the service, describing how she had made him welcome when he first arrived in Huddersfield as a Parliamentary candidate, knowing no-one in the town, and many people at the service described her as a kind and lovely person.

Her family had put together a display of her craft work for the service.  She was probably more enthusiastic about crochet than knitting, and amongst the crochet, I recognised two designs by Jane Crowfoot, one looking a splendid against a flower arrangement.
.

But she was a keen knitter too.  Amongst other things, a Kaffe Fassett coat was on show.

The other knitting on display (including a lacy shawl that I didn't get a good photo of) reminded me of the weekend we had in Blackpool in 2016 at the Westcliffe Hotel.  Cath was one of seven of us, trying different lace techniques and being well looked after by Paula Chew - we had a lot of fun together.

In the last few years, she adored making things for her granddaughter Alicia, and I remember her bringing along the latest Alicia outfit in progress to our knitting groups.  I love the 'Rainy Day' crochet cardigan (a design by Catherine Waterfield) and the raccoon sweater. 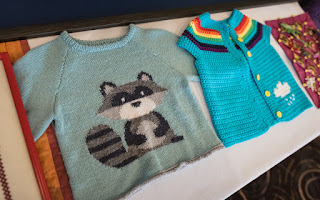 And she was an accomplished embroiderer, though I hadn't seen any of that aspect of her craft work before. 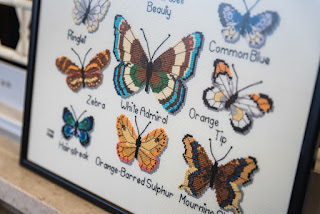 Cath was a devoted listener to Radio 4, and much of the music at the service was based on that - the theme music from Desert Island Discs, The Archers, and the Shipping Forecast.  (To be honest, I would not recognise 'Sailing by' as the theme music for the shipping forecast, and although the Archers' theme music is a jolly tune and instantly recognisable, in our house it's signal to turn off the radio - takes all sorts.)   Also played during the service was "The Shipping Forecast" by Les Barker, a parody of a genuine shipping forecast, read by Brian Perkins (a genuine Radio 4 newsreader).


The service was a lovely way to remember Cath, who gave a lot to the world and should have had longer to carry on giving.  We miss her.

Many of these photos were very kindly given by Cath's daughter, Laura.
Posted by Barbara at 16:07