I found this nice rhyme, illustrated with cartoons, on the back of one of Patons & Baldwins monthly update lists.  It warns knitters of several mistakes to avoid in washing wool (using boiling water, using too strong a soap solution, not rinsing it properly, and then putting it through the wringer). 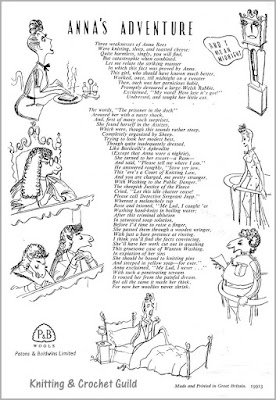 
ANNA'S ADVENTURE
Three weaknesses of Anna Rees
Were knitting, sleep, and toasted cheese;
Quite harmless, singly, you will find,
But catastrophic when combined.
Let me relate the striking manner
In which this fact was proved by Anna.
This girl, who should have known much better,
Worked, once, till midnight on a sweater
Then, such was her pernicious habit,
Promptly devoured a large Welsh Rabbit,
Exclaimed, "My word! How late it's got!"
Undressed, and sought her little cot.

The words, "The prisoner in the dock"
Aroused her with a nasty shock,
And, first of many such surprises,
She found herself in the Assizes,
Which were, though this sounds rather steep,
Completely organised by Sheep.
Trying to look her modest best,
Though quite inadequately dressed,
Like Botticelli's Aphrodite
(Except that Anna wore a nightie),
She turned to her escort—a Ram—
And said, "Please tell me where I am."
He answered roughly, "Stow yer jaw,
This 'ere's a Court of Knitting Law,
And you are charged, me pretty stranger,
With Washing to the Public Danger.
The sheepish Justice of the Fleece
Cried, "Let this idle chatter cease!
Please call Detective Sergeant Jupp."
Whereat a melancholy tup
Rose and intoned, "Me Lud, I caught 'er
Washing hand-knits in boiling water;
After this criminal ablution
In saturated soap solution,
Before I'd time to raise a finger,
She passed them through a wooden wringer,
With just a bare pretence at rinsing.
I think you'll find the facts convincing,
She'll have her work cut out in quashing
This gruesome case of Wanton Washing.
In expiation of her sins
She should be bound to knitting pins
And steeped in yellow soap—for ever."
Anna exclaimed, "Me Lud, I never . . ."
With such a penetrating scream
It roused her from the painful dream.
But all the same it made her think,
For now her woollies never shrink.

The monthly updates were sent to yarn shops, I believe, to notify them of the latest P&B pattern leaflets.   We don't have many of them in the Knitting & Crochet Guild collection - most yarn shop owners would not keep them for very long, I guess, and so they have probably only survived by chance.  They are not dated, but I think that this one was issued in November 1946.

I don't know what yarn shop owners were supposed to do with the rhyme - I think that P&B also used it in magazine ads aimed directly at knitters, so I suspect that it was just a filler for the back page of the leaflet.  It's very entertaining, though I don't know how necessary it was - I would have thought that knitters would have known not to treat woollen garments so harshly.  But maybe one or two would not - and better to be told this way than to find out by ruining something that had taken hours of work.
Posted by Barbara at 18:15