In February, I wrote about finding several balls of Patons Lucelle in the Knitting & Crochet Guild collection, and showed several pattern leaflets for little jumpers knitted in Lucelle on very fine needles.  I thought at the time that the best way to show what the yarn is like would be to knit a swatch, and when we had a lot of snow a couple of weeks ago, and I mainly stayed at home, I decided to do it.

I also wanted to try out the lace pattern in one of the jumper patterns. The leaflet calls it a "Shetland-pattern jumper" and it has three lace panels on the front and one around the bottom of each sleeve.

I had assumed that, apart from the lace panels, the jumper was knitted in stocking stitch, but got an unpleasant surprise on reading the instructions - the background is a lace mesh stitch pattern.  Barbara Walker calls it 'Star rib mesh' in her book A Treasury of Knitting Patterns.  It's a 4-row repeat, and on alternate rows you just purl, so it's relatively simple.  Even so, it's a lot harder than stocking stitch.  I certainly wouldn't ever be able to knit it without watching what I was doing, as I can with stocking stitch.

The main lace stitch, in the panels, is much more complicated.  It's a 40-row repeat, for one thing - though again, on wrong side rows you just purl.  (I might have given up otherwise.)  What's more, the number of stitches changes constantly.  You start with 23 stitches, but sometimes you have as many as 31 stitches, and other times it goes down to 17 stitches.  Which is pretty crazy.

After I had done the first pattern repeat, plus a few more rows, I was a bit puzzled about what it was supposed to look like.  (I made a small mistake half way up - it's supposed to be completely symmetrical.  But apart from that, I followed the instructions correctly, I assure you.)  There are some things that might be intended to look like leaves, and some smaller shapes that might be petals?  or smaller leaves?   Altogether it doesn't make much sense to me. 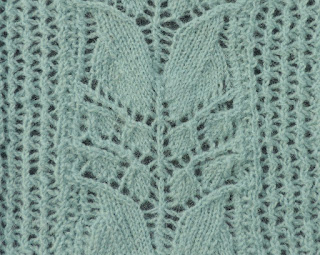 So I went back to the pattern leaflet and had a closer look. 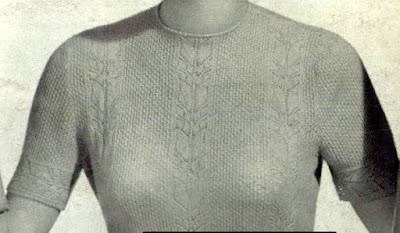 I thought that in some places, the photo seemed to show two leaves, a four-petalled flower, and some smaller leaves either side.  Hard to tell. It looked as though there perhaps should be a central disc in the middle of the four 'petals' - like a sort of daisy. So for the second pattern repeat, I changed one row of the pattern to make it look more flower-like. 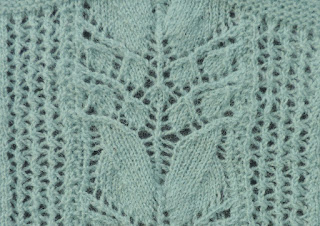 I don't know.  It's quite pretty, I suppose, but I'd like it to look a bit less random.   And it is much too much work to want to repeat it.

Here's my complete swatch.  I do at least now have something to demonstrate what Lucelle is like when it's knitted up.  I do wonder, though, whether anyone ever knitted this jumper, apart from the sample knitter.  Who was, I hope, paid more than the usual rate for it. 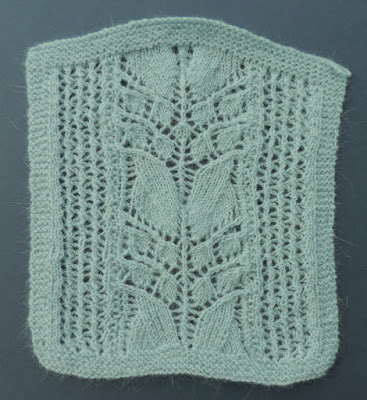